Kinnikuman Wiki
Register
Don't have an account?
Sign In
Advertisement
in: Kinnikuman characters, Perfect Origin, Characters from Turkey,
and 2 more

Abyssman is a member of the Perfect Origin.

Abyssman is one of the Perfect Origin, a group of powerful Perfect Chojin who were hand-picked by the Chojin Enma and trained extensively with the rest of his peers. He later became the night watchman of the Chojin Graveyard and protected the Forbidden Mortar.

Abyssman had a tendency to be abrasive and boorish, but was also insightful, especially towards opponents he personally knew, such as Goldman. He also held a great amount of respect for The Man and saw him as a saviour, and wouldn't tolerate others badmouthing him. He was also very confident in his abilities and in his Abyss Guardian technique.

One of the ten Perfect Chojin who were spared from death by the Seven Capillaria Rays, due in part to the Chojin Enma. He would join his fellow Origins on Earth to train for millions of years.

During a sparring match, Goldman would leave a large scar across his back, upsetting Abyssman. [1] The Chojin Enma then punished him for this mistake with an extremely brutal punch to his mouth, leaving him disfigured. He later began hiding this disfigurement with a mask. [1]

Learning from the mistakes, Abyssman trained himself hard and created the Abyss Guardian technique to protect his back from opportunistic attackers. He would later be in charge of watching over the Chojin Graveyard and commanding the demons to keep it maintained, as well as guarding the Forbidden Mortar that created artificial power.

In the process of turning back the Forbidden Mortar, one of the Graveyard Demons runs to attack General Devil. General Devil sees that this is a disguise and attacks back, at which point Abyssman reveals his true identity, and proceeds to chastise the demons. Abyssman states that he cannot allow General Devil to turn back the mortar, or to destroy the graveyard, and when General Devil derides The Man's principles, an incensed Abyssman challenges him to a battle and takes it to his "Ring of Punishment". [2] The two shake hands, before beginning to fight in earnest. [1]

They exchange a series of equal blows, before Abyssman attempts an Abyss Guardian, but the attack fails to down General Devil, who rises back onto his feet. Abyssman states that he learned a lot from their past together, such as to never turn his back to an enemy, and delivers a barrage of blows to General Devil. General Devil flips over and tries to attack his back again, but an Abyss Guardian blocks him. This is followed by a Graveyard Tackle. [1] This allows Abyssman to set up for his finisher: Abyss Decapitation. [3]

General Devil foils the move at the last second by changing his body, using his diamond power. The technique is not perfect, allowing Abyssman to deliver a series of bloody blows to General Devil. Abyssman tries another Graveyard Tackle, but General Devil avoids the blow and regains the advantage with his Nine Point Seal technique, which causes another wound on Abyssman's back. This also shatters his Abyss Guardian, allowing General Devil to use a Double-Arm Spin-Sault. [3] This is followed with a Double-Knee Crusher. [4]

This move seals all four of Abyssman's limbs, and General Devil finishes with a Hell's Guillotine.

He then takes Abyssman's Fire Dumbbell, leaving his corpse on the ring. [4] 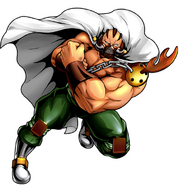 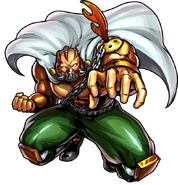 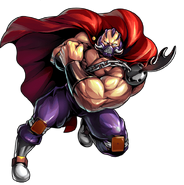