21st Chojin Olympics Arc
Benkiman is an ancient chojin from the Incan Empire based on a urinal.

Benkiman is a chojin based off the design of a squat-toilet, who hails from an ancient race from Peru. He is defeated by Kinnikuman and dies sometime before the events of Kinnikuman Nisei, but took a student before these events by the name of Wash Ass - Wash Ass carries on his memory and spirit in his matches against the new generation of wrestlers.

Despite his cold and severe exterior, he is quite nice and selfless, always willing to let other use him as his personal toilet when they need it. He has the fame of being a merciless fighter, as well as being a well respected individual back in the Incan Nation. Despite the fame of his brutality he gained, he has zero tolerance for child abuse as seen when he got angered when he saw Marco beaten by Giganteman.

He is literally a humanoid urinal, with short legs and long arms. He is usually depicted with faecal matter on his head in the shape of ice cream. He tends to be depicted with a grey-metallic coloration, but some times is colored with golden parts. In the anime adaptation, his ice scream-shaped faeces is changed to a water faucet.

They have a formal, friendly relation after helping with the problem with the Western-Style Toilet Chojin, lead by Benzaman. Benkiman respects him as his senior.

Long, long ago, Benkiman was under the command of the Governor of the Incan Empire, when the Spanish Conquistadors arrived. He tried to defend his lord, but was knocked down in a suplex by one of the enemy troops. This made Benkiman loose his memory of who he was, including his true name.

Benkiman awakes with no knowledge of who or what he may be, but only that he is a chojin wrestler. [2] He is named "Heladoman" by the local population, where he lives in Perú, due to the item on top of his head looking like an ice-cream, which is "Helado" in Spanish. We see him compete within the Peruvian preliminary matches for the 21st Chojin Olympics. [2]

Benkiman fights in the B-ring and defeats Alpacarn. Due to Benkiman relying on submission holds, and not being a brutal fighter, he is unpopular with the crowds who throw ice-cream at him, due to the top of his head looking like soft-serve ice-cream. After the fights, Benkiman sees Marco in distress, as the boy needs to defecate, and allows the boy to defecate inside him. At this point, Benkiman is told that his grandfather is dying, and he goes to his bedside. [2]

Before his grandfather dies, he reveals that the Incan Empire invented the flushing toilet, and Benkiman was a bodyguard in the emperor's employ. He witnessed his parents murdered by invading forces, and - trying to defend them - was struck on the head and gained amnesia. The item on top of his head is revealed not to be ice-cream, but faecal matter. It is then revealed the Nazca lines are not of a monkey, but a person defecating from ancient times. [2] At this point, his grandfather dies.

The match then begins for the preliminary finals, as Benkiman tries a surprise Drop Kick, but it leaves no impact on Higanteman. Higanteman uses a series of blows to knock Benkiman out of the ring, and - as the countdown begins - Benkiman sees that Marco has been beaten and badly abused by Higanteman. He enters the ring and is able to counter Higanteman with a Crab Claw, as he seeks to avenge Marco. [2]

He follows this with an Ant Ball, before kneading Higanteman's body into a ball and shoving it inside himself, as he uses a Benki Flush. Benkiman then announces he is no longer "Heladoman", but "Benkiman" to the crowd, and the crowd - in appreciate of him - starts to throw faeces at the ring, instead of ice-cream as before. [2]

This victory enables him to enter as a competitor in the 21st Chojin Olympics. [2]

He was personally chosen by the Incan Emperor to represent their country in the Chojin Olympics, causing his rival, Benzaman, to be jealous about it, planning a revenge against him. Benkiman call the authorities, and Copper Bellman and his assistant Nickel came to help. After discovering that Baron Toilet, one of Benkiman pupils, was kidnapped, the two detectives go to search for him.

Right before Benzaman could kill Copper Bellman, Benkiman, and the Incan police came to his dojo. Benzaman, angry as seeing how his plans were failing apart, decides to challenge Benkiman, and he accepts. Proving that the softness of the ceramic is more powerful than the hardness of the Emerald, he manage to defeat Benzaman, but Copper Bellman ask him for no kill him. So, Benkiman forgives Benzaman, and together, they unite their forces to make a better future for the Toilet Chojin.

Benkiman was named the Incan representative to participate in the Chojin Olympics. He manage to pass with success the preliminary trials, and be one of the twelve chojin that will enter the main matches. In the pachinko machine, were the chojin were put to organize the matches, he ends up in a seed position, so he will not fight in the first round.

He was buying snacks, just when an hysterical King Cobra came screaming for help, so Benkiman took him and flush him away with his benki flush. The, he participate in a friendly horse race with the rest of the chojin, just before his match against Kinnikuman.

Kinnikuman enters with a wacky costume, but he was stopped for entering the ring. Harabote brings some losers from the preliminaries, and told to them that the one that manage to touch Benkiman will return to the competition. This ends with Kani Base jumping to the attack, just to be taken and flushed by Benkiman. Tileman, thinking that his great mass would be impossible to flush down, tries to touch the Incan Chojin, but this rival manage to catch his head, and using an ancient technique, makes Tileman in the form of an ant ball, and then flushes him.

This fights make Kinnikuman freak out, so he tries to run, but he ends up been caught by Benkiman, who tries to flushed him. But Kinnikuman, breaking the fourth wall by saying that “even the authors doesn’t know what is down there”, so he luckily escapes… just to be caught again and made into a ball and then flushed.

Benkiman appears at the fitness test that all the Justice Chojin are having in the stadium. He was then put in a life-supporting bubble and then was one of the many chojin holding up the Diamond Ring during the match against Akuma Shogun.

Alongside the rest of the Justice Chojin, Benkiman travels to Osaka Castle to cheer for Kinnikuman in his final fight with the last of the Fated Princes, Super Phoenix.

He was present at Meiji Jingu Stadium for the Fan Appreciation Day, and saw first hand how an unknown group of Perfect Chojin descended from the sky. And after seeing how Strong the Budo defeated and humiliated Tileman, both Benkiman and Curry Cook jump into action, but are quickly defeated and turned into humans. After that, they stay as spectators for some of the fights. It’s unknown how, but he then returned to his chojin form.

They plan to take the treasure hidden beneath the building, attacking the training Justice Chojin on the rings atop the monument. [4] Gear Master kills one of the training chojin. [4] Wolfman proceeds to attack them in defence, but all six fight against him at once, until Benkiman arrives with Teapackman, Canadianman, and Curry Cook. [5] Benkiman takes Gear Master into a head-lock, before the two factions declare a set of five matches to determine the victorious group. [5]

Benkiman dodges in time of an oncoming attack, while Gear Master's gears destroy the corner-post. [7] After Benkiman is knocked down, Gear Master attempts a moon-sault, which Benkiman dodges. [8] Benkiman catches Gear Master in a Romero Special, only for Gear Master to break free when the gears on his wrists and ankles cut into Benkiman's flesh, after which he tries to force Benkiman into his Genocide Gears. A Heraldo Spin allows Benkiman to counter the attack, and - attempting to fly overhead - gets caught by Gear Master, who grinds into his body.

In an attempt to free himself, Benkiman sprays Gear Master with water. This washes off the oil from Gear Master's gears, stopping them from properly working and making them stop. [8] Benkiman attacks with a series of middle kicks. [9] This is followed by a one-hand back-breaker, which aggravates the wound on Benkiman's leg, but Benkiman uses Friendship Power too German-suplex Gear Master. Gear Master is thus skewered on the corner-post, but eventually stands and removes the skewer. [9] Gear Master reveals that the Six Spears are not aliens from Omega Centauri, but originally from Earth and are returning to their home-planet. [10]

During the fight against Lunaight, the spirits of Benkiman and the other fallen reserve Justice Chojin show up to support Wolfman, activating his Friendship Power.

His student, Wash Ass, reveals that Benkiman died before the events of Nisei began. Before dying, he entrusted his student with the objective to defeat the son of his old rival, Kinnikuman.

Benkiman and Curry Cook in their human forms 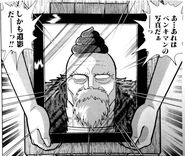 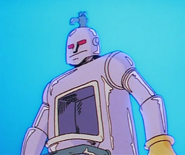 Benkiman in the anime adaptation 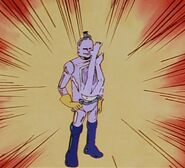