Chapter 105 (Nisei)
Bone Cold (ボーン・コールド, Bone Cold) (Lone Bone Cold in the English manga) is a fictional character from Yudetamago's manga and anime series Ultimate Muscle (Kinnikuman Nisei). He is appears during the Fire of Inner Strength Challenge Arc as an antagonist toward Mantaro, while he is also the murderer of Mince and the son of Kinkotsuman.

Bone Cold is the most powerful member of No Respect (ノーリスペクト, No Respect) and the son of Kinkotsuman. As a child he ran away from home in order to escape his father's abuse (harsh training in the anime). He becomes an assassin that specialises in murdering Seigi Chojin. He teamed up with Hanzo and Fork the Giant to form No Respect. On Planet Kinniku he has killed 152 soldiers and while this is considerably lower than Hanzo and Fork's body count, he is still considered the strongest and cruellest of the three. The reason why his was lowest was because he does not kill anyone unless he is paid for it; the 152 he killed were all important officers with bounties on their heads.

Kinkotsuman physically and emotionally abused Bone Cold during his upbringing, which included causing a facial scar by attacking him with a cane. [1] He was constantly attacked by Kinkotsuman, who resented his history of defeat at the hands of Kinnikuman, and Bone Cold felt unloved by his father. [2] He ran away as a child, at the age of eight fearful that he would be murdered by his father. [3][4] His mother abandoned them when he was five-years old, as she could not stand the abuse. [5]

Bone Cold is introduced in disguise, where he relaxes and trains on a beach in anticipation for his upcoming match. [7] He appears without his disguise during an exhibition match that Mantaro Kinniku is in attendance, and proceeds to challenge a blindfolded Jyro to a friendly match and wins. [6] He then attacks Jyro in earnest, after removing his blindfold, and proceeds to remove Jyro's ears and threatens to murder him, at which point the Planet Muscle guards arrive. Bone Cold murders Jyro with a "3D Crush". [6]

He reveals he has a contract out on Mince, who is the second-most wanted Muscle League member to be killed. [8] He is attacked by Check Mate and Terry the Kid, but neither have contracts on them, and so he defeats the former and injures the leg of the latter, which incapacitates them. [8] Bone Cold then takes Mince hostage, taking him to Shuri Castle, Okinawa. [8] Bone Cold places Mince inside the mouth of a lion statue, which he crunches down to cause him pain any time he speaks inappropriately (or to prevent the truth of Meat's past from being revealed). [9] He reveals the Shiisa ring, shaped like a lion in Okinawan tradition designed to ward off evil. [9][10]

The winner of the match will be the first to incapacitate their opponent and retrieve their lantern, and Bone Cold uses his visor to gauge Mataro's strength. [10] Mantaro - after a slow start - eventually gains the upper-hand, and Bone Cold realises Mantaro is useless without his manager, thus he attacks Mice to cause Meat to become distracted, and the two continue to battle a bloody fight. [11] Mince intervenes by flustering Bone Cold by telling him that he knows about his upbringing - he threatens to reveal Bone Cold's secret, should Bone Cold reveal his secret first. [1] Bone Cold tells Meat that he was abandoned by his parents, before he shoots at Mince and pierces his heart. [12]

Mince dies, leaving Bone Cold to continue his match. [13] After a long and bloody match, Kinkotsuman finally makes his appearance at the ringside. [14] Bone Cold goes all out with his attacks, as he seeks to prove his worth to his father, but Kinkotsuman wants him to lose, as he wants Bone Cold to be redeemed as he himself found redemption. [4] Bone Cold is defeated with a Muscle Millennium attack, and willingly breaks off his hand in his defeat in order to free himself. [15] Kinkotsuman offers Bone Cold a sum to hire him as an assassin, with himself as the target, and hopes this will make them even and redeem himself, but Bone Cold refuses; although he does not forgive his father, he realises the importance of charisma and friendship. [15]

Bone Cold is taken back into custody. [15]

Bone Cold breaks Mince's hip in the anime dub, as opposed to killing him outright. The abuse he suffers also is toned down, and he is given strict training and an upbringing instead, with his father often bragging about cheating on his mother . . . at backgammon. He is also a "bounty hunter" in the dub, no longer an assassin. 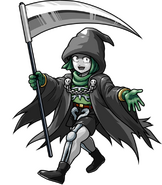 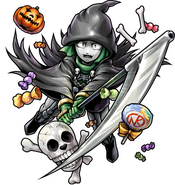 Nasty Gimlet
Add a photo to this gallery

Retrieved from "https://kinnikuman.fandom.com/wiki/Bone_Cold?oldid=37256"
Community content is available under CC-BY-SA unless otherwise noted.