20th Chojin Olympics Arc
Brockenman was one of the three more feared Brutal Chojin. He is a Nazi-themed chojin, and the father of Brocken Jr.

A Brutal Chojin that is also a Nazi, with aspirations of world domination. Brockenman is also known for being the father of Brocken Jr., who wants revenge on Ramenman for the former's death. His death was very gruesome and in a way set the tone for some of the more important fights in how violent they could/would be. His name comes from The Brocken.

Despite his ambition of world domination, Brockenman genuinely cared about Brocken Jr, to the point of personally training him. He was incredibly strict towards Brocken Jr., preferring the term "Lehrer" over "Father". To be a strong warrior, one must forget about the blood that binds them outside the home. His method for teaching the Red Rain of Berlin finisher is to cuff the hands to iron balls and strike a red-hot pot multiple times.

Ramenman is matched against Brockenman during the match-ups, where he is set to participate in the B-block. [1] It is revealed - through newspapers - that Ramenman is the most brutal competitor, as he has killed his opponents in the past in particularly gruesome methods. [1] The match is set to be aired over radio, in the Korakuen Hall. [2]

Ramenman starts in the blue corner, where Brockenman starts with an advantage by throwing his coat over Ramenman to blind him and stamping him into the ring. He then proceeds to pummel Ramenman with spiked knuckle-dusters, and this is followed by a Poison Gas Attack. Ramenman finally regains his composure; he rams his foot into Brockenman's mouth, before striking him with a series of arm blows. He wins the match with a Camel Clutch, which kills Brockenman by ripping him in half. [2]

While he was in the Chojin Graveyard, he admitted to the Graveyard Demon that he wanted to create a Fourth Reich that transcends race and religion. And to do that, he will get the four Life Balls and revive himself, so he can teach Brocken Jr. the Brocken Clan's secrets. As he has the potential, Brocken Jr. will beat the world's greatest Chojin. Even the rivals of the Brocken Clan, the Robin Clan, are not exempt.

Once he obtained all four Life Balls, he learned that his son had gained a new mentor in the form of Ramenman and made lots of new friends, obtaining the power of friendship. Satisfied that Brocken Jr. will start a new Brocken Clan in the future, he gives his Life Balls to the Graveyard Demon (his new friend) for safekeeping and fades away completely.

Beyond Love and Hate

In the Brocken Jr. & Ramenman one-shot, Brocken Jr's memory of Brockenman lets him easily slip out of Ramenman's Camel Clutch. And during this one-shot, Ramenman thought he was a worthy opponent, to the point of celebrating the anniversary of his funeral during the Chojin Olympics. Brocken Jr. even got to talk to Brockenman's spirit.

Brockenman became a posthumous character. When his son Brocken Jr. fought against the Six Spears of Omega Centauri in a tag-match, Brocken likens his former grudge against Ramenman to Omegaman Aristera's grudge towards The Man. If a grudge lingers within the heart, it will ruin the future of that person. 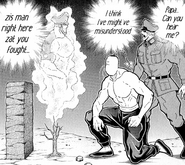