Kinnikuman Wiki
Register
Don't have an account?
Sign In
Advertisement
in: Characters from Canada, Justice Chojin, Male characters,
and 2 more

Chapter 29
Canadianman (カナディアンマン, Canadianman) is a Justice Chojin from Canada, who is best friends with Specialman. He has yet to win a single match within the series.

Canadianman is a large and very powerful Justice Chojin from Canada. He usually lives as a lumberjack, but also owns his own gym called Canadianman Gym. He is exceptionally strong, being able to lift the Korakuen Stadium during his fight with Robin Mask during the 20th Chojin Olympics. He was initially depicted as a top-label Chojin, but afterwards became less active and, along with Specialman, became one of the most well-known "background" Chojin in the story. He appears in Kinnikuman Nisei as a Legend and the father of Canadian Boy.

He's a prideful chojin that belief that pure strength is the only method to win a fight. He is seen doubting Kinnikuman a few times, but - after seeing him in action - he starts to believe in him. Later, Canadianman wishes to move past his humiliating defeats; he becomes a more reserved and cunning fighter, trying to become a more "tactical" chojin, and tries to show that he is not just muscles.

His body is colored like the Canadian Flag and he has the Maple Leaf on his chest. He has red boots, red arms and shoulders, and red shorts, while the rest of his body is white in colour. There is also a three-lined pattern that extends from between his eyes out like two eyebrows and one vertical line.

Canadianman is usually seen with Specialman, his best friend. They are both usually presented in the background, as spectators of some fights. He, alongside Benkiman, Curry Cook and Teapackman came into Wolfman's help.

He is presented as the Canadian Representative in the Chojin Olympics, and he become one of the eight finalist after the preliminary eliminations. He is then paired with Robin Mask.

After his defeat, Robin Mask show respect for him. He is later seen on a date during a reception before the finals.

He goes with Specialman and other Chojin Olympics competitors to see the final match of the American Tag Tournament (Kinnikuman and Terryman vs. Skull Bozu and Devil Magician).

He participates in the 21st Chojin Olympic alongside the other Justice Chojin, but - before starting the preliminaries - he and Skyman attempt to greet Kinnikuman, and Kinnikuman greets them back (but he mistakes them for Curry Cook and Kintaman). Canadianman manages to pass the first trials, but fails to make it past all the preliminary events.

He takes part in the Annual Chojin Physical, before the Six Devil Knights show up and challenges Kinnikuman. He and the rest of the Justice Chojin are placed in life support bubbles by the Silver Mask. He momentarily loses faith in Kinnikuman, but - after Wolfman's sacrifice - he regrets having doubted him. Later, he is part of Planetman's Face Planet technique.

At the final showdown between Kinnikuman and General Devil, Canadianman (and the rest of chojin that were inside the life support bubbles) was transported under the ring. He, Specialman and Harabote Muscle were the only ones that manage to hold up the ring during Kinnikuman's fight with General Devil before Geronimo's spirit arrives to help. After the fight, both Canadianman and Specialman celebrate Kinnikuman's victory.

During the Dream Chojin Tag Arc, only eight competing tag-teams are allowed to fight, and yet nine competing tag-teams arrives and wish to participate. [3] Ashuraman states that they should eliminate the weakest team, which are the Big Bombers. They grow angry at the insult of being called weak, which causes Terryman to try and hold them back from starting a fight before the tournament has begun. [3]

They attack, but Sunshine and Asuraman swing them around and knock their heads together, and this is followed by a Hell's Combination (a collision of two Romero Specials). The two are instantly incapacitated, as they lie bloody on the canvas of the ring and eight teams are left by their elimination. [3]

Canadianman was watching the Survivor Match on his TV, while he was cutting down trees. He then hears Neptuneman's message and travels with other Justice Chojin to Osaka Castle to support Kinnikuman during his fight final with Super Phoenix.

Canadianman was in his forest, cutting down trees, while singing a Canadian song. Soldierman and his team watch him in the distance, hoping that he isn't the next member of their team. But fortunately for them, he wasn't.

After the sign of the peace treaty between the three chojin factions, Canadianman and Specialman were playing with the kids at Meiji Jingu Stadium, when - suddenly - a group of Perfect Chojin descend from the sky, which scares the children.

Seeing that they were chojin that they had never seen before, Tileman, Curry Cook and Canadianman get hit by the wooden sword of Strong the Budo. Just after these events, Geronimo is beaten up by the Perfect Chojin, and both Specialman and Canadianman are defeated by Max Radial. After being badly injured, they act as spectators for some fights.

Canadianman - along with Teapackman, Curry Cook and Benkiman - arrive at Sagrada Familia. [4]He comes in defence of Wolfman, to prevent the Sagrada Familia from being taken over by Omegaman Aristera and Omega Centauri's Six Spears. [4] The Six Spears accept the Justice Chojins' challenge to a battle, at which point they pair off into five matches on the five rings that were built upon the Sagrada Familia. [5] Canadianman takes on Pirateman in Special Ring E, where they lock up in the centre of the ring. [5] He initially holds out in the beginning, but gets serious when Teapackman gets killed by Hailman.[6]

Pirateman knees Canadianman in his face, when Canadianman states he is ready to lay down his life for justice, and this is followed by a rolling savate. [7] Canadianman uses the recoil from the ropes to land a blow on Pirateman's chest, but Pirateman's jacket clamps down around Canadianman's wrist, allowing him to use a Treasure Hunt Suplex. Just as he tries to stomp on Canadianman's face, Canadianman throws him into the air and attempts a power-bomb, which is countered with a Flying-Body Scissors-Drop.

Canadianman throws Pirateman from him with a bridge, and decides to show the new technical wrestling moves he trained himself in during the month leading up to this fight. [7] Canadianman tries to kick Pirateman, but his foot gets stuck again in Pirateman's jacket. [8] Despite his trapped foot, Canadianman proceeds to kick at Pirateman's face, until Pirateman lets go of his foot and traps him in a head-lock. After using a tiger suplex, Canadianman switches from power moves to technical moves, including an STF.

Canadianman reuses, and this leads to him getting his back broken by Pirateman's finishing move, Saint Elmo's Fire.[10] This rips open his body, nearly tearing him into two halves, and the match is declared in Pirateman's favour. [11] His spirit appears later to cheer Wolfman on when he was losing to Lunaight.

Canadianman was one of the many Legends serving as an instructor at the Hercules Factory. He is also shown to have a son, named Canadian Boy, but no interaction is seen between them.

Alongside many other tag teams, Canadianman an Specialman were chosen to enter as a possible substitute team. He and Specialman were reluctant to put themselves forward to take part in the Reserve Match (mostly due to their past experiences). It is also revealed that after Canadianman was eliminated from the Universal Chojin Tag Tournament, he returned home to find that his gym had been trashed. Canadianman and Specialman were debating whether to participate, when Geronimo and Brocken Jr. appear to take their positions. 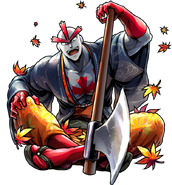 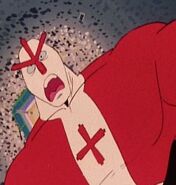