Kinnikuman Wiki
Register
Don't have an account?
Sign In
Advertisement
in: Kinnikuman characters, Perfect Origin, Characters from Japan,
and 3 more

Crowman is a chojin styled after a crow. he is the Perfect Ninth, and a member of the Perfect origins.

Crowman is a Perfect Chojin that appears during the Perfect Origin Arc. He is an opponent of the Ninja, and uses extreme speed to match his jutsu and counter his attacks. He has the appearance of a crow, and his attacks are often bird-based in style and technique. Crowman ultimately loses to the Ninja, when he is dismembered.

At the Tokyo Silver Pavilion, the Ninja arrives to battle against Crowman. [1] A swarm of crows descend on the pavilion, where they drop stones, and the Ninja catches a stone and realises it's silver. They coat the Silver Pavilion in a shining silver, when Crowman materialises on top of the building. [1] The Ninja begins with a kick, when Crowman teases him for being a student of Goldman. [2]

The two engage in a series of blows, until Crowman uses a Raven Wing Strike, only to realise that he has attacked a log that the Ninja used as a diversion. Crowman pulls a dumbbell from his feathered costume, which he uses to reveal a ring beneath the pavilion. He reveals this pavilion is place where Silverman trained the Ancient Chojin who would go on to become Devil Chojin and Justice Chojin. [2]

Crowman knocks the Ninja into the ring. [3] The Ninja attempts a jutsu, which fails, but Crowman reveals that the Ninja's techniques rely on speed, which he also possesses and thus can counter any jutsu. He proceeds to use a Parrot Back Body Motion on the Ninja, followed by a Crow Beak to the face. Crowman attempts many Crow Beaks, but the Nina begins to dodge them. The Ninja uses another log to evade the attacks, revealing the canvas is covered with feathers shed from Crowman. He uses one of the feathers to use a new jutsu against Crowman. [3]

He coats Crowman in the feathers on the canvas. [4] He attempts to set them aflame, but Crowman uses a Crow Feather Shield, which forms a barrier to stop the flames, and follows with a Raven Wing and a Crow Feather Fireball. This engulfs the Ninja in flames, but he uses his cape to change the canvas into a lake, and dives inside to douse the flames. This is followed by removing the cape to change the canvas into a fiery pit, before using a Back-Flip Skewer. Crowman is sent hurtling into the lava of the pit, but builds a quick nest to protect himself. [4]

The attack is reversed with a Crows Bombs Away, which sends the Ninja into the pit. [4] The Ninja breaks free with an elbow drop and a drop kick, and removes the fiery pit to put back on his cape. [5] It is then the Ninja realises his friends have come to support him. The Ninja states that he does not need their support, as he is fighting as a Devil Chojin for General Devil, and throws a smoke bomb into the ring. He follows with an Air Shuriken, which pins Crowman to a pillar of the ring, before delivering a series of blows against him. [5]

Crowman starts to knock away the shuriken, before countering with a Crow Beak. [6] The Ninja reveals he took the blow on purpose, as it gave him an opening to strike Crowman's chest, and he is prepared to die to obtain victory in battle. Crowman descends again with a Peacock Feather Blade and Crow Beak Scissors, this is finished with a Crow's Prey Skewer. The Ninja then looks out of the ring, where he sees that his friends have assumed a formation to send signals to him on the ring. [6] This triggers his Friendship Power. [7]

The Ninja gains the upper-hand, before trapping Crowman in the ropes. He turns the ropes to steel, which adds extra pressure onto Crowman's body parts, but Crowman uses a Parrot Back Body Motion to break free and trade places with the Ninja. The Ninja realises he cannot win at present, so uses a Ninja Face Copy, which allows the Ninja to copy Crowman's appearance and his skills. They both use attacks that allow them to switch places with their opponents, until Crowman seemingly traps the Ninja in the ropes and dismembers him. The crows feast on the body parts, as the Ninja reveals his true form and that he is the winner. [7]

The Crowman is thus defeated and killed. [8] 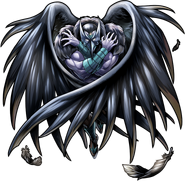 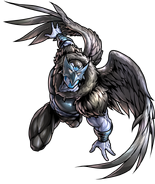 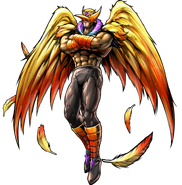 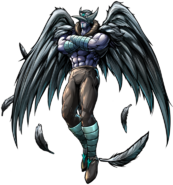