20th Chojin Olympics Arc
Curry Cook is initially presented as one of the three Brutal Chojin that participate in the Chojin Olympics, and the first serious opponent of Kinnikuman.

Curry Cook is a character introduced during the 20th Chojin Olympics Arc, where he battles against Kinnikuman. The wrestling style he uses is Mala Wrestling () and his seiyuu is Masaharu Sato. He has a cameo role during Kinnikuman Nisei as a trainer at the Hercules Factory.

The Holy Man of Love and Fury

Curry Cook attempts to enter into a Mala Wrestling School, where he breaks several dummies to impress the three judges before him. He is told that he cannot enter the school, despite having mastered all techniques, as he has too much rage in his heart. If he can control his temper and become a Justice Chojin, for a full year, they will allow him to wear a "Mala" on his head and join their school. [3]

Cambridgeman knocks Curry Cook unconscious, and Curry Cook awakes in Meena's home. [4] He reveals that his name is "Singh" and thanks Meena for her help, and he returns to sleep, but - when he awakes again - the house is empty. He flees in search of Meena, where he finds Cambridgeman has planted cannabis upon Meena and accuses her of being a drug dealer. He says that he will arrest everyone at the market as accomplices, and he will run a monopoly on the market, before destroying Meena's stall. [4]

When Meena objects, he strikes her across the face.

Curry Cook tries to resist getting angry, but sees a plate of curry that he can use as a "Mala". He dons the dish and his powers increase enough to defeat the henchmen, and Cambridgeman attacks him several times, before attempting a Kingdom Hail. Curry Cook attacks him with a Garam Masala Thumbing, which blinds Cambridgeman, and then slices a cut down Cambridgeman's side. The match is concluded when Curry Cook uses a Chakra Sting, which impales Cambridgeman with his foot. [4]

He tells Meena that she is safe, but she is afraid of his violence.

Curry Cook accepts his fate as a Brutal Chojin. [4]

Kinnikuman had made it into the eight finalists of the 20th Chojin Olympics, which included Robin Mask, Terryman, Ramenman, Skyman, Brockenman, Canadianman, and Curry Cook. After a drawing, Kinnikuman was placed in B-Block which consisted of Curry Cook, Brockenman, and Ramenman, all known in the Planet Kinniku Grand Library for brutal fighting styles, hence them being Brutal Chojin.[5]

Due to the brutality of the chojin, Harabote placed the B-Block matches in the small Korakuen Hall which would only be broadcast on radio, compared to the massive Korakuen Stadium in which the A-Block matches were taking place and would be broadcast on television. The A-Block match against Robin Mask and Canadianman ended quickly with Robin taking down Canadianman in only a few moments. The B-Block match between Ramenman and Brockenman began with Brockenman using fowl and cheap tricks, such as spiked-knuckles and poison gas. Ramenman was able to take the upper-hand by taking Brockenman down with his Chinese Kenpo, finishing him off with his Camel Clutch, ripping Brockenman in half and which terrified Kinnikuman, Meat, and Mayumi.[6]

After seeing the brutal death of Brockenman, Kinnikuman's fears of dying the same way at the hands of Curry Cook caused him to try to run away from the match. The only way Kinnikuman was able to get into the ring was because Meat and Mayumi dragged him back and told him that Curry Cook's face resembled that of a kappa. The match became a steel cage match and Curry Cook began the match by taking a weapon out of his curry sauce and stabbed Kinnikuman's forehead. While wallowing in pain, Kinnikuman was able to break Curry Cook's curry plate which caused Curry Cook to steal some gyuudon from the audience.

The sauce that had been stabbed into Kinnikuman's forehead caused him to act different, in which he bashed Curry Cook against the steel cage and even drank the milk that Curry Cook was originally going to use against him. Kinnikuman's insane tactics caused Curry Cook to give up the match and run away, advancing Kinnikuman to the semi-finals.

He goes with the other Chojin Olympics competitors to see the final match of the American Tag Tournament (Kinnikuman and Terryman vs. Skull Bozu and Devil Magician).

He participate in the 21st Chojin Olympic alongside the other Justice Chojin, but he gets eliminated at some point during the prelims.

Making a tag team known as Joint Number 1, he and Skyman are defeated by the tag team of Pentagon and Blackhole, the 4D Killer Combo, making them enable to enter the new tournament.

Survivor Match for the Kinniku Throne

Curry Cook was one of the many Justice Chojin that traveled to Osaka Castle to cheer up for Kinnikuman in his final fight with Super Phoenix.

After his stupid defeat at Kinnikuman's hand, hes scolded by an unmasked Skyman, which Curry Cook didn't know at first it was him. After being scolded for his defeat, Curry Cook challenge him into a match, to show him what's the true meaning of being a Brutal Chojin, so he could understand his point of view.

Some weeks pass, and the two of them face of. At first, it seems like Skyman, with his aerial techniques, was going to win, but suddenly, Curry Cook attacks him with a fork, injuring him in the forehead. Curry Cook start to beat him in a brutal way, and Skyman, without any other option, takes the fork and attacks Curry Cook. With the ring covered in blood, Curry Cook passed out, and Skyman is declared the winner...but then the fight is said to be forfeit.

Now Skyman undrestand what means to be a Brutal Chojin, what is Curry Cook purpouse, and the sadness that he has. Once Curry Cook awakes again, the two start talking about the meaning of ech figther, one being an idol loved by the crowd, and the other to be a villain, hated by them. And by that, Skyman came to the conclusión of making a tag team, since they both are really different, and they may understand each other better if they fight as a team. Curry Cook accepts. Curry Cook, after meditating the propouse during three days, decide to team up with him.

Years later, the both of them, with their tag team formed, they decide to enter the Galactic chojin tag tournament, and face against the tag team of Pentagon and Black Hole, the 4D Killer Combo. Sadly, all their hopes dies at that fight, since they are defeated by them.

During the Fan Appreciation Day at Meiji Jingu Stadium, Curry Cook was selling his special curry in his own post, when suddenly a mysterious group of Perfect Chojin appeared from the ski, scaring the kids. Seeing that they were chojin that they had never seen before, Tileman, Curry Cook and Canadianman get hit by the wooden sword of Strong the Budo. And after seeing how Strong the Budo defeated and humiliated Tileman, both Curry Cook and Benkiman jump into action, but are quickly defeated and turned into humans. After that, they stay as spectators for some of the fights.

It is unknown how, but he then returned to his chojin form.

The Omega Centauri Six Spears arrive at the Sagrada Familia. [7]

They seek to access the 'treasure' beneath the monument, and together they kill the Justice Chojin guards that are protecting the area. [7] Mariquitaman reveals himself, as he proceeds to attack the young chojin training on five rings atop the monument, and decapitates a chojin known as Haroldman. [8] Wolfman attempts to take on all Six Spears at the same time, at which point Curry Cook arrives with Canadianman, Teapackman, and Benkiman.[9] Mariquitaman is taken in a hold by Curry Cook, as a battle is declared between both factions. [9]

Mariquitaman enters one of the rings in which the young chojin were training, in Special Ring D, and Curry Cook follows to challenge him to a one-on-one fight, while their teammates battle. [10] Curry Cook begins with a series of low-kicks, until he realises Teapackman has been killed by Hailman. [11] Mariquitaman eventually counters with two high-kicks. [12] He takes flight to slam into Curry Cook with a lariat, before using a Marquita Flip. This downs Curry Cook, who uses an All-Spice Shield to temporarily get behind Mariquitaman.

Curry Cook uses a Garam Masala Thumbing, switching to a triangle-lock hold, and - channelling his Brutal Chojin nature - unleashes a barrages of elbow drops. [12] Mariquitaman uses a Mariquita Flying to break free, and - as he attempts a pile-driver - Curry Cook avoids the blow by bracing his hands on the canvas.[13] After kicking Mariquitaman away, Curry Cook uses a Mandala Fireball. This is follows by a double-armed suplex, along with a Curry Roux. [13] He rips open a hole in Mariquitaman's abdomen, before using a Ganges Back-Breaker, but Mariquitaman leans into the attack - despite adding to the damage - so that he can break free. [14]

Mariquitaman breaks Curry Cook's left leg, and proceeds to use a Cochineal Twist. Kinnikuman tells Curry Cook to use his Friendship Power, even though it is what the Six Spears want, so that he will not be torn in two, but Curry Cook refuses lest it help the Six Spears in their cause. He is torn partially open, before being thrown into the air, and is finally killed with a Ladybird Wing Blade. [16] The match is thus decided in Mariquitaman's favour, and Curry Cook thanks Kinnikuman for his friendship before his death.[17]

Despite General Devil's request to Enma Chojin to prevent the dead Chojin to further return to life, an older, wiser and calmer Curry Cook is seen as one of the instructors at the Hercules Factory, reasoning that as the first generation of Justice Chojin is now too old to fight the d.M.p is now imperative introducing the second generation to galactic wrestling. 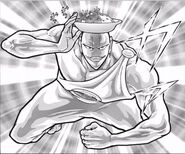 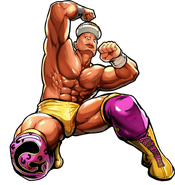