Kinnikuman (2011): Chapter 1
Dalmatiman is a Perfect Chojin styled after a dalmatian dog, and member of the Perfect Large Numbers.

Dalmatiman is a Perfect Chojin that works alongside Strong the Budo, and engages in a tournament against the Justice Chojin. He fights against Black Hole, after watching the match between Terryman and Max Radial, and is ultimately murdered by Black Hole after losing the match to him.

Unlike many of his fellow Perfect Chojin, who prefer to maintain a calmer and stoic posture, Dalmatiman is a vicious and ruthless wrestler that fights in a more brutal and bloody way. This, however, doesn't mean he doesn't have the proud of a Perfect Chojin, since he is a loyal follower of the rules and will kill himself in the case he looses.

As his name suggest, Dalmatiman is a humanoid-looking dog that has his whole body exposed, with only a collar and a pair of armbands as accesories. He is able to manipulate the black spots of his body, throwing them as proyectiles towards his enemies.

During Chojin Fan Appreciation Day, Dalmatiman appears with a group of Perfect Chojin from the air. [1] He and his group announce that the Hell Missionaries were just advance troops, whereas they hold true power. [2] After Strong the Budo removes Geronimo's vocal cords, in a show of strength, Dalmatiman bites into his neck to tear open the flesh. [3] A tournament is then announced between the Perfect Chojin and Justice Chojin. [4]

After Max Radial's death, Dalmatiman helps create a giant machine-gun and enters into a chamber. [5] He - along with his colleagues - are shot out and create giant holes in the concrete beside the ring. [5] Dalmatiman goes to China, where he can challenge Ramenman. [6] While waiting for Ramenman to appear, Dalmatiman is surprise-attacked by Black Hole. [6]

The match takes place on the Great Wall of China; Dalmatiman counters Black Hole's attacks with a Doggy Nail Kick, but his foot goes directly through Black Hole's face. [7] They exchange in a series of blows, until Black Hole appears in eight different places using his four-dimensional powers, and all eight attack Dalmatiman. [8] Dalmatiman is able to counter with a Speckle Control, followed by a Dalmatiman Clutch. After changing his head into a dog's head, he is able to track Black Hole's scent and rips the real Black Hole back into the match (after Black Hole tries to hide in his shadows). [8]

He engages in a series of attacks, the Mad Dog Tooth, which tears chunks of Black Hole's flesh from his body. [8] This is followed with a Mad Dog Flip. [9] He uses a Salivating Shield to stop shadows from reaching Black Hole, which stops him from disappearing and reappearing at will. To counter Black Hole's Black Hole Absorption, he uses his Speckle Control once more to focus his spots on his stomach, before using a Speckle Bomb. The canon - that emits from this attack - plugs up Black Hole's face hole. He then proceeds with his finisher: Dog Ear Crush. Black Hole dislodges the canon. [9]

After Black Hole retries his attack, Dalmatiman uses his Doggy Nails and Speckle Control to counter once again. [10] Black Hole uses an Extreme Black Hole to suck the entire body of Dalmatiman inside him, but Black Hole lures him back out using a bone-shaped hole, which enables him to use a flying-knee strike to Dalmatiman's face. He ultimately defeats Dalmatiman with a Fourth Dimension Kill. This knocks out Dalmatiman and secures a win for the Justice Chojin, but Black Hole uses a Red Mantle of Death to decapitate Dalmatiman, foiling his suicide attempt. [10] 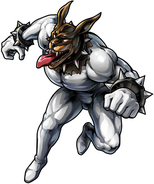 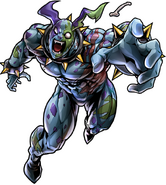