Kaijuu Extermination Arc
Detective Akaiwa is a chief inspector. He was renamed "Detective Gobugari" in the anime.

Detective Akaiwa (known as Detective Gobugari in the anime) is the Chief Inspector of the Jōsai (城西, Setagaya, Nerima, Nakano, and Suginami) District Police. When there's trouble, he and his men the Akaiwa Corps (赤岩軍団 Akaiwa Gundan), will often show up with machine guns blazing and then leave without actually solving anything.

In the manga he only appears in two stories, but in the anime he appears frequently and for legal reasons he is renamed "Gobugari (五分刈 "close haircut"), Police Inspector of the West Sumidagawa Station". He was referenced in Ultimate Muscle briefly as "Detective Tommy Gunn."

Before Kinnikuman and the Brutal Alien could start fighting, Detective Akaiwa and his men arrive, and charge throw Brutal Aline, but he warns them that is they advance one step more, he hill hurt the hostages. Akaiwa, taking his glasses off, starts thinking what they have to do...but at that same moment he's knocked out by Mari's bus.

Detective Akaiwa returns again when Kinnikuman and Meat try to stop Nagaashigon for crashing to a dam, but before he could shot, he's knocked out again.

More than simply changing his name, Detective Akaiwa (now Gobugari) is a recurring supporting character in the first episodes, having something of a rivaly with Kinnikuman. Althought as the series progress, he, Kinkotsuman and Iwao start acting as Kinnikuman "Cheering Squad", and basically being the filler comedy of the episodes. 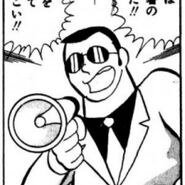