The Devil Chojin (悪魔超人,, Akuma Chojin) are a type of chojin that are defined by their birth in the Demon World and/or their allegiance to Satan.

In Kinnikuman (as well as Kinnikuman Nisei), there are two different meanings to the words Devil Chojin given by Yudetamago:

Furthermore, their history is long, and therefore their long battle against the Justice Chojin is not limited to just the characters in the Kinnikuman and Kinnikuman Nisei.

The student of Justiceman, named Milosman, and was the first Perfect Chojin to lose to the Devil Chojin in an official match. [1] The ancestors of Ashuraman proceeded to steal Milosman's arms, after which Ashuraman's clan - the Ashura Clan - rose to glory as leaders of the Demon World. The Demon World was a place created by Goldman to emulate the Chojin Graveyard and house his new faction of chojin: the Devil Chojin. [1]

The Demon World is ruled by the Ashura Clan, a clan of ancient devils from which Ashuraman is the heir.

It was established after the defeat of Milosman, a Perfect Chojin, by an ancestor of Ashuraman. [2] After this, Goldman used it as his base of operations and styled it after the Chojin Graveyard.

There exists a grand palace on a high hill, with guards that directly serve the Ashura Clan. [3] In the midst of a grand stadium, which lies some distance from the palace, is a statue of Milosman. [2]

The Seven Devil Chojins were the reputed to be the most powerful and ruthless chojin in the universe. According to Harabote Muscle it took 100,000 Justice Chojin to capture them and imprison them in a space roach motel. They were accidentally freed by Kinnikuman. Desiring to fight the strongest Justice Chojin, they split Meat's body into pieces to force Kinnikuman to fight them.

These Devil Chojin appeared with those mentioned above when they challenged the Justice Chojin (immediately following their escape), but then inexplicably vanished.

The elite forces of the Devil Chojin, formed by the most powerful and ruthless of their kind. They act with direct orders from Satan and General Devil. They once stole the Gold Mask, which later become General Devil's body.

The new formed troops of General Devil/Satan. Formerly, weak and miserable chojin, they are given new bodies and new powers to fight for their lord.

They are natives from Planet Omega. Their kind was originally form Earth, and they want to get revenge on the Perfect Chojin. They also want to get the power of Friendship to save their planet, and their alliance with Satan is just temporary. 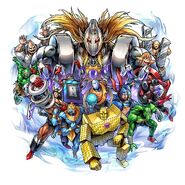 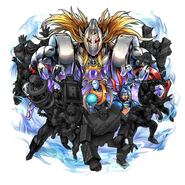 Akuma Shogun and his disciples