Chapter 59
Edith Harrison is the chairperson of the World Superman Council, who is very close to Jean Steamboard and Beauty Rhodes.

Chairwoman of the World Supermen Council (世界超人評議会, Sekai Chōjin Hyōgikai) (WSC). Former student of God Von Erich. Although shown to be very ruthless, at the end of the arc she and The Emperors rescue Robert from Kinkotsuman.

Edith first appears alongside her wrestler, Beauty Rhodes, on a large screen to talk with Kinnikuman. [1] It is stated that Edith has joined forces with Sheik Seijin to defeat the World Superman Association, and - after an argument among themselves - both hang up and leave the screen. [1] Edith is present when Kinnikuman defeats Beauty Rhodes, finding the glasses that will become the signature of his alter ego: Channelman. [2]

Edith suspects Channelman works for Sheik Seijin, which leads her to split from his group. [3] After some argument, God Von Erich declares there will be a tag tournament, and Edith introduces Beauty Rhodes to his tag partner: Jean Steamboard. [4] When The Emperors fight against Blood Illusions, Edith tries to call off the match and forfeit when her wrestlers are in danger, but the Blood Illusions continue to fight past their limits. [5] Edith later returns with her team, so that they can give Terryman back his leg in the finals (after it is stolen by the rival teams). [6] 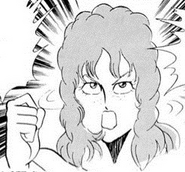