Braid Sensation (ブレイド・センセーション), Ura Nage
Fiona (フィオナ) is a female Justice Chojin from Kinnikuman Nisei ~All Out Assault~. Fiona loses her match against Doomman, after competing in the Top Chojin Festival.

One of the few female chojin. Nicknamed the Diva from Hell (地獄の). Fiona is known for using her hair to her advantage, as it can grip and penetrate objects, and she is shown to be determined and refuses to give up in battle. Fiona is able to win the respect of men like Kevin Mask, although she loses first round of the Festival.

Fiona has bright pink hair; this is tied back into a long braid, which reaches below her waist, and also has a fringe. She has pink eyes, pale skin, and a slim figure with a modest chest. Fiona's battle costume consists of a sleeveless purple top, cut-off shorts, black chaps, and heeled boots. She also has chunky black bracelets and a matching black necklace, which has attached a small chain.

Kinnikuman Nisei ~All Out Assault~

At Yokohama International Stadium, Fiona arrives at the "Top Chojin Festival". [1] The first test of the preliminary stage is a set of monkey-bars elevated very high, which are greased to make it difficult to stay in place, and during the competition Scorpion riles Fiona with sexist comments. [2] He grabs her in a Body Scissors attack. As she falls, her braid wraps around the bars and stops her from falling to the ground. Fiona attacks back with a Rolling Savate. [2]

Fiona succeeds in this preliminary match and is one of the eight finalists to compete in the festival. [3] Fiona attacks Mantaro when he flirts with her, and - when allowed to pick her opponent - picks The Doomman. [3] The match takes place on the 8th storey of a department store, where - on entry - she throws her hat at Doomman in mockery of him. [4] Doomman begins by charging at Fiona, but she dodges and aims a kick at his head. [5] This is followed by a painful Stunner.

After delivering a series of punches, she uses the ropes for a Tope Con Giro. When Doomman tries to Power-Bomb her, she counters with a Omoplata, and follows with a Triangle Hold. Fiona even manages to fling him out of the ring using her braid of hair. [5] Doomman finally gets in an attack with his Doom Ball. [6] Fiona uses her braid to drag him out of the Doom Ball, but - as he gains the advantage - she collapses against the ropes and begins to cry. Fiona refuses to stay down, and Doomman uses his four-pronged rotating shoulder-guards to shred her clothes. This causes her to faint.

Kevin Mask takes pity on her and dresses her in his coat, to hide her nudity. [6] 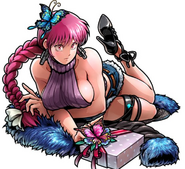 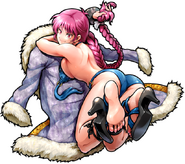