Gear Master (ギア マスター) is a chojin in the form of gears. 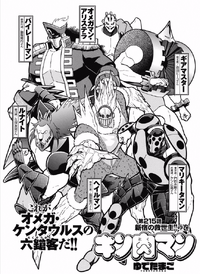 Gear Master is one of the Omega Centauri's Six Spears sent to Earth by Satan to retrieve Psychoman's secrets from his lab underneath the Sagrada Familia. Luckily, they were stopped by the Chojin Olympic finalists and challenged to death matches.

During these death matches, Canadianman and Teapackman were killed by Pirateman and Hailman, respectively. As a result, Benkiman became more determined and exploited Gear Master's weakness of his gears being precision instruments that need to fit exactly together, leading to Benkiman trying to ruin his gears and jam them with an iron post he impales Gear Master on, but Gear Master uses the to reactivate his gears to go back on the attack.

After he corners Benkiman and inadvertently causes him to activate his Burning Inner Strength, he gets trapped and flushed down Benkiman's Toilet Body, seemingly ending the match. But strangely, it becomes apparent that Gear Master can materialize gears, as Benkiman's body gets covered in them and Gear Master spins them to help him escape and allow him to finally crush Benkiman with his Genocide Gears.

When the Fated Princes show up to kill the Six Spears, Gear Master's opponent is Kinnikuman Big Body. Their match is set to take place in China's Forbidden Palace.

While at first Gear Master underestimates Big Body, as he was the first Fated Prince to lose the Scramble for the Throne tournament, he's impressed as Big Body does his best to fight him valiantly. In the end, when the cursed chandelier of the Forbidden City Palace (set to crush the loser and denounce him as a fraud) falls over the defeated Gear Master, with his last words expresses sadness about his own fate, with Big Body there to ease his last moments.

When Super Phoenix attempted to finish off Aristera with a super-powered Muscle Revenger, Lunaight, Hailman and Gear Master's souls appear on Aristera's Omega Hand and channel their Friendship Power into Aristera, giving him the strength to take on Super Phoenix. They tell him to never give up on their hopes before vanishing.

Retrieved from "https://kinnikuman.fandom.com/wiki/Gear_Master?oldid=23376"
Community content is available under CC-BY-SA unless otherwise noted.