Kinnikuman Wiki
Register
Don't have an account?
Sign In
Advertisement
in: Kaiju, Characters from Dokuro, Living characters,
and 2 more

Iwao (イワオ, Iwao) is a rocky kaiju and the sidekick of Kinkotsuman.

Iwao is the henchman of Kinkotsuman and a source of comic relief in the series. He initially appears as a villain that is defeated by Kinnikuman and later becomes a part of Kinkotsuman's entourage, but eventually he switches sides and becomes a good character on the side of justice.

Iwao first appears during a fight Kinnikuman has among amusement park mascots. [1] He tries several times to get Kinnikuman's attention, until he cries from the lack of attention, but - on noticing him - Kinnikuman swiftly defeats him with a Kinniku Flash. [1]

Later, Natsuko wishes to do a story about Kinnikuman, but - when a fight breaks out - Terryman appears to resolve the conflict. [2] Terryman flirts with her, Kinnikuman calls her a 'slut'; she storms away and is kidnapped by Iwao. Kinnikuman saves her, while she takes many photographs. [2]

Iwao appears regularly as a sidekick of Kinkotsuman, such as when he finds Tendon at a park and brings him back to Kinkotsuman to be turned into a giant kaiju. [3] He also turns Natsuko into a giant to attack Terryman. [4] Iwao also dresses in disguise as a young woman, along with Kinkotsuman, to lure Kinnikuman to a secluded house and kidnap him, where he's put into a dungeon. [5]

Kunta appears, one day, to explain that three Kaiju are attacking her village and lay siege to her island: Octopus Dragon, Harigoras, and Ukon (who is later shown to be Kinkotsuman and Iwao in disguise). [6] After Kinnikuman and Terryman defeat Harigoras and Octopus King, a piece of meat appears before Kinnikuman and Kinnikuman eats the meat. Custom dictates whomever eats the meat must fight Ukon one-on-one in battle. It is meat thrown by Ukon in a challenge. [6]

Kinnikuman goes to a Colosseum, who has taken Kunta hostage and is attacked by the locals with various objects, as they throw things into the Colosseum. [7] Tabuchi tries to save the princess, but Ukon flicks him away with a giant finger. When Kinnikuman climbs a pole to escape, Ukon shakes it to get him down. Kinnikuman soon loses the fight, causing Ukon to rule over the people and turn them into slaves. Kinnikuman becomes his servant, but - when lighting a cigar for Ukon - he sets Ukon on fire in a blaze. [7]

The skin melts off Ukon, revealing he was a robot all along. When he kidnaps Kunta once more, the locals call upon Mammora to save them. Mammora picks Kinnikuman up on his back and flies towards Ukon, whom they smash into a wall to remove his arm. Kinnikuman uses the Kinniku Flash, but it does not work on Ukon. After several exchanges of blows, Mammora destroys Ukon and it is revealed Kinkotsuman and Iwao were working the robot the entire time, but they soon run away. [7]

He and Iwao later enlarge animals at a zoo to disrupt the big promotional event for the finals, but are thwarted by the Justice Chojin. [10] Just before the finals, Kinkostuman and Iwao also kidnap Kinnikuman, but - after being distracted by Momoko Momoi - Meat Alexandria tricks them into taking them to the location of the finals. [11] He later breaks into the stadium only to be stopped by Ramenman. [12]

During the finals, between Kinnikuman and Robin Mask, Kinkotsuman watches while in chains. [13] He proceeds to slap Kinnikuman, when Kinnikuman shows signs of weakness and loses his confidence. [13] Kinkotsuman also cheers on Kinnikuman along with the crowds,[14] and also celebrates his victory with the others when the match is complete. [15]

Iwao and Kinkotsuman are hired by Skull Bozu to sabotage the Robin Mask vs. Kinnikuman match, so that the World Supermen Federation can keep the championship belt. [16] Kinkotsuman watches the match with Sheik Seijin and Skull Boze, before Iwao sends an aeroplane crashing down onto the ring. [17] They later reappear when God Von Erich declares a tag-team round-robin match to settle the dispute between the three American Chojin faction, and also enter the competition to win on behalf of the kaiju. [18]

They make their debut at the opening ceremonies of the American Chojin Tag Tournament. [19] They promise to Kinkotsuman that they will not let him down, but soon a battle royale breaks out among the contestants; Black Shadow starts to attack Iwao, despite being on the same side. [19] Their first match is set to be against the Blood Illusions, which they knock The Machineguns out of the way in order to fight their opponents. [20]

The Rugged Brothers charge forward, but Devil Magician knocks Iwao out of the ring, before the Blood Illusions' focus their attentions on the Black Shadow. They rip off his arms in a blood-filled scene, before forcing the "8 Defence" on him, which - as Black Shadow can't give up (due to having no mouth) - they are able to completely dismember him. They toss his head at Jean Steamboard, while Kinkotsuman grieves his death. [20]

In the Rugged Brothers second match, Iwao teams up with Kinkotsuman. [21] Kinkotsuman attempts to win against The Machineguns by dropping the light rigging on them from above, and it is revealed Kinkotsuman has changed the name of the tag-team to Monster Master/Student Combo. [21] After The Machineguns break free, Kinnikuman uses a Jumping Neck-Break Drop on Kinkotsuman and Iwao, which wins The Machineguns the match with a knock-out. [22]

During the match between The Machineguns and Blood Illusions, Kinkotsuman sides again with Sheik Seijin, and steals Terryman's prosthetic leg with Iwao's help. [23] Kinkotsuman is tackled by Robert, which results in Kinkostuman striking Robert. [23] Robert - despite being unconscious - refuses to let go of the leg. [24] This results in Robert being beaten by Kinkotsuman, until Edith Harrison stops them and Beauty Rhodes return Terryman his leg by throwing it into the ring. [24]

He and his master Kinkotsuman were participating in a contest show for the price of 1,000,000 Yen. Kinnikuman and Meat compite against them, but they lost at the last questition, making Kinkotsuman and Iwao the winners of the contest.

After years without appearing, he, alonside Kinkotsuman, appear during the last fight of the Survivor Match for the Kinniku Throne, when several other Chojins reappeared along Kinnikuman's friends to cheer him on.

Alonside his master and several other notorious Chojin, Iwao was invited to Kinnikuman's wedding.

In the anime, Iwao, alongside his boss, Kinkotsuman, eventually join up with Detective Gobugari and act as Kinnikuman's main cheering squad. They appear in almost every episode, always acting as comic relief.

Also, they both return in the sequel series, Scramble for the Throne, and as in the original series, they are mostly the filler comedy for the episode, without really bringing anything more.

Iwao is not that bright and frequently copies Kinkotsuman's laugh and speech pattern. For example, he frequently says dawasa (だわさ, dawasa) (which Kinkotsuman often ends his sentences with) as a single sentence, seemingly meaning "I agree". This annoys Kinkotsuman and often prompts him to bop Iwao on the head. Iwao also refers to Kinkotsuman as Sensei. 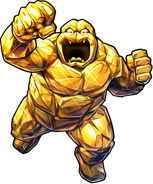 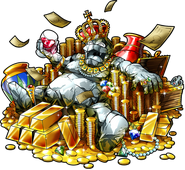 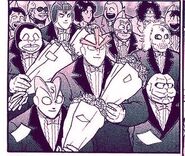