Chapter 3
Kazuo Nakano is a recurring gag-character in Kinnikuman. In the anime adaptation, he became the colour-commentator for the matches. In Kinnikuman Nisei, he is a commentator in both the manga and anime. He is the husband of Kimiko and a friend of Announcer Yoshigai.

Kazuo Nakano (中野和雄,, Nakano Kazuo) is the vice editor-in-chief of Weekly Shonen Jump and the editor-in-chief of Fresh Jump. Because of this, he was often caricatured by Jump's mangaka, especially in Yudetamago's manga series Kinnikuman, where he became a regular supporting character.

His role in Kinnikuman and Kinnikuman Nisei is primarily as a color commentator. In Ultimate Muscle, he is called "Doc" Nakano; however, he is not a doctor of any kind.

He is an odd little man who will often skip work in order to see a wrestling match and sometimes tries to get involved in the fight (though he is always knocked away in the next panel). For really big matches, he has been known to sell his wife in order to afford a ticket.

Nakano-san is generally viewed as an idiot and a nuisance, although he'll usually be the first to laugh at Kinnikuman's antics. In earlier chapters, he seems to like gyudon as much as Kinnikuman, preferring it served as saranami (meat and rice served separate).

Kazuo Nakano is a short, middle-aged man. The wig he wears is usually loose and falls off most episodes of Kinnikuman, though in Kinnikuman Nisei, he was shown to be able to remove it during Mantaro Kinniku's fight against MAXman. 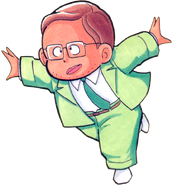