Chapter 18
Kinkotsuman is the first antagonist that appears in Kinnikuman, but after the first arc, he became just a recurring comedy gag, alonside his sidekick, Iwao. His name is changed to Skullduggery in Ultimate Muscle, and is reveal that he had a son, Bone Cold.

Kinkotsuman is an alien who has come from Dokuro-sei (ドクロ星,, Planet Skull) in order to conquer Earth. He was Kinnikuman's nemesis in the early chapters and was just as silly and stupid as his rival. After his loss to Kinnikuman he reappears with Iwao as his sidekick, and from then on they plot schemes in order to defeat Kinnikuman.

In the original manga he disappears after the series switches to just wrestling, but in the anime he and Iwao appear alongside Detective Gobugari as members of the Justice Chojin cheering party for the remainder of the series.

Kinkotsuman is a chojin who seems to just a skeleton. He has white hair that's long and goes past mid-point on his back. He wears black trousers with a red belt that has pebble designs on it. He also wears red shoves, gloves and scarf. He has the character for bone (骨) on his forehead.

Kinkotsuman shows skill in marksmanship. He's a genius as seen by his mecha Ukon, his UFO base, and the device he used to brainwash and grow Natsuko Shono.

At a later date, Kinnikuman tosses away Tendon; Tendon is found by Iwao, who takes him to Kinkotsuman. [4] They use a special ray to make Tendon large and monstrous in nature, so that Tendon may attempt to murder Kinnikuman. [4] He retreats to hiding in his UFO base, which Kinnikuman and Terryman try to knock from the air and bring down to Earth. [5] Kinkotsuman and Iwao decide to defeat Terryman, in order to make defeating Kinnikuman easier, and turn Natsuko into a giant kaijiu. Kinkotsuman sends in Bazoogara to attack Terryman, who tries to help Natsuko, and with Kinnikuman he defeats Bazoogara and returns Natsuko to normal, much to Kinkotsukman's dismay (as his UFO base is destroyed in the process). [5]

In an attempt to kidnap Kinnikuman, Kinkotusuman dresses as a woman and invites Kinnikuman to a celebratory party at a mansion while in disguise. [6] He and other kaiju beat up Kinnikuman, before tossing him into a dungeon. Okamaras helps Kinnikuman to escape, and Kinkotsuman chases after him, but Okamaras upends a can of gasoline, which trips up Kinkotsuman. When Kinnikuman uses his Face Flash, this explodes the gasoline and injures Kinkotsuman. [6]

Kunta appears, one day, to explain that three Kaiju are attacking her village and lay siege to her island: Octopus Dragon, Harigoras, and Ukon (who is later shown to be Kinkotsuman and Iwao in disguise). [7] After Kinnikuman and Terryman defeat Harigoras and Octopus King, a piece of meat appears before Kinnikuman and Kinnikuman eats the meat. Custom dictates whomever eats the meat must fight Ukon one-on-one in battle. It is meat thrown by Ukon in a challenge. [7]

Kinnikuman goes to a Colosseum, who has taken Kunta hostage and is attacked by the locals with various objects, as they throw things into the Colosseum. [8] Tabuchi tries to save the princess, but Ukon flicks him away with a giant finger. When Kinnikuman climbs a pole to escape, Ukon shakes it to get him down. Kinnikuman soon loses the fight, causing Ukon to rule over the people and turn them into slaves. Kinnikuman becomes his servant, but - when lighting a cigar for Ukon - he sets Ukon on fire in a blaze. [8]

The skin melts off Ukon, revealing he was a robot all along. When he kidnaps Kunta once more, the locals call upon Mammora to save them. Mammora picks Kinnikuman up on his back and flies towards Ukon, whom they smash into a wall to remove his arm. Kinnikuman uses the Kinniku Flash, but it does not work on Ukon. After several exchanges of blows, Mammora destroys Ukon and it is revealed Kinkotsuman and Iwao were working the robot the entire time, but they soon run away. [8]

Kinkotsuman and Iwao appear in the sidelines to cause chaos. [9]

He first tries to terrorise the chojin with his invisibility gun, during the second-round preliminary event. [10] They turn themselves invisible, before tickling the chojin during the kaiju-lifting competition, and this causes the chojin to drop the kaiju and be too injured to proceed in the competition. They try to tickle Kinnikuman, but fail, and instead kick him in the crotch, which causes him such pain that he lifts the kaiju very high and passes the preliminary event. Kinnikuman then throws the kaiju on Kinkotsuman and Iwao, exposing them. [10]

Kinkotsuman later plants a bomb on the moon, during the third-round preliminary event to retrieve a rabbit from the moon's surface, but the bomb explodes as soon as Kinnikuman touches it (as opposed to the plan of unknowingly him carrying it back to Earth, thinking it a rabbit), and the explosion sends him quickly back to Earth. [11] This sends all the final contestants onto Earth at the same time, due to the blast, and a battle royale is decided to settle who shall pass through to the main competition. [12] Kinkotsuman creates a gun that will make anyone obey him and sneaks into the ring as a referee. Terryman steals the device and makes the contestants attack Kinkotsuman, who thus fails in his plan to defeat Kinnikuman. [12]

Kinkotsuman later obtains a chojin rifle, after which he escapes the police to break into the grounds of the Chojin Olympics. [13] He tries to shoot Kinnikuman, during his match against Ramenman, but it seen by Terryman, before shooting him accidentally in surprise. This injures Terryman's leg, later leading him to need a prosthetic leg. [13][14] He and Iwao later enlarge animals at a zoo to disrupt the big promotional event for the finals, but are thwarted by the Justice Chojin. [15] Just before the finals, Kinkostuman and Iwao also kidnap Kinnikuman, but - after being distracted by Momoko Momoi - Meat Alexandria tricks them into taking them to the location of the finals. [16] He later breaks into the stadium only to be stopped by Ramenman. [17]

During the finals, between Kinnikuman and Robin Mask, Kinkotsuman watches while in chains. [18] He proceeds to slap Kinnikuman, when Kinnikuman shows signs of weakness and loses his confidence. [18] Kinkotsuman also cheers on Kinnikuman along with the crowds,[19] and also celebrates his victory with the others when the match is complete. [20]

Iwao and Kinkotsuman are hired by Skull Bozu to sabotage the Robin Mask vs. Kinnikuman match, so that the World Supermen Federation can keep the championship belt. [21] Kinkotsuman watches the match with Sheik Seijin and Skull Boze, before Iwao sends an aeroplane crashing down onto the ring. [22] They later reappear when God Von Erich declares a tag-team round-robin match to settle the dispute between the three American Chojin faction, and also enter the competition to win on behalf of the kaiju. [23]

In the Rugged Brothers second match, Iwao teams up with Kinkotsuman. [27] Kinkotsuman attempts to win against The Machineguns by dropping the light rigging on them from above, and it is revealed Kinkotsuman has changed the name of the tag-team to Monster Master/Student Combo. [27] After The Machineguns break free, Kinnikuman uses a Jumping Neck-Break Drop on Kinkotsuman and Iwao, which wins The Machineguns the match with a knock-out. [28]

During the match between The Machineguns and Blood Illusions, Kinkotsuman sides again with Sheik Seijin, and steals Terryman's prosthetic leg with Iwao's help. [29] Kinkotsuman is tackled by Robert, which results in Kinkostuman striking Robert. [29] Robert - despite being unconscious - refuses to let go of the leg. [30] This results in Robert being beaten by Kinkotsuman, until Edith Harrison stops him and Beauty Rhodes return Terryman his leg by throwing it into the ring. [30]

Kinkotsuman, after years without appearing in the story, returns once more time, with Iwao at his side, to cheer for Kinnikuman, his old archnemesis, during his fight with Super Phoenix.

Kinkotsuman makes his first appearance after seeing the New Generations heading off to Japan. [31] He then has a flashback explaining that he is the one who built Meat Alexandria's cryogenic sleep device. [32] Meat said it was necessary in order for him to help the New Generations in the future to come.

Kinkotsuman makes his first appearance after seeing the New Generations heading off to Japan, wishing them good luck. [33]

He reappears during the Burning Inner Strength Challenge arc, where he chastises Meat for neglecting his duty towards Mantaro Kinniku and the Muscle League. [34] It is revealed he is the father of Bone Cold. [32] He wishes his son would lose the match to Mantaro, as he hopes it will make him realise that an evil path will not bring him satisfaction, and he hopes Bone Cold will be redeemed as he redeemed himself. [32]

It is revealed that Kinkotsuman beat his wife, causing her to abandon Bone Cold when he was just five-years old, and he beat Bone Cold continuously until Bone Cold ran away at the age of eight. [35] Kinkotsuman catches Bone Cold after he falls from the ring once defeated, and offers Bone Cold money to kill him, as he hopes to atone for his sins of abuse - Bone Cold refuses and finally realises the error of his ways. [36] 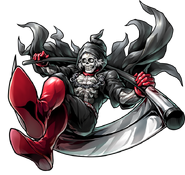 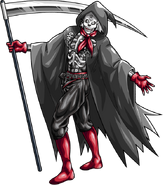 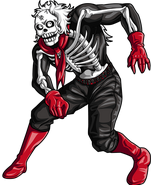