First used during the fight with Warsman (Super Bear Gorōta in the anime). He places an opponent's neck on his shoulder and grabs their thighs. He then jumps up and lands in a sit-out position, causing damage to the neck, spine, and groin. This move is also used by his son Mantaro. Renamed "Butt Buster" for the first several episodes of the English Ultimate Muscle dub, until Mantaro reinstates its true and original name during his battle with Dial Bolic.

There is a big question mark whether this move was invented by Prince Kamehame, Kinniku Suguru, or is part of the Kinnikuman Dynasty Heritage. It is possible that Kamehame developed the technique, but never used it in any of his matches, passing it on to the Kinniku clan instead. 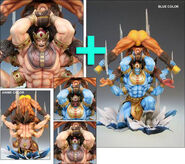 Retrieved from "https://kinnikuman.fandom.com/wiki/Kinniku_Buster?oldid=32555"
Community content is available under CC-BY-SA unless otherwise noted.