Suguru begins the series as a lazy and emotional man, one that wishes to become famous. He often chases after women, while moving from job to job, until the Chojin Olympics, where he finds his purpose as a chojin wrestler. He slowly grows a more serious personality, while developing close friendships with the Justice Chojin. At the end of the series, Kinnikuman is crowned king of Planet Kinniku. In the reboot, he returns to Earth to help defeat new evil forces.

In Kinnikuman Nisei, Suguru has lost his muscles. He explains to Mantaro that old age has robbed him of most of his physical prowess, but he's still able to employ grapples and leaves, and his knowledge and coordination are unaffected. He has a lot of the characteristics of his father, such as bickering with Mantaro. Suguru has respect for Mantaro and they maintain a healthy father/son relationship. Suguru - "a child at heart" - tried to get in Mantaro's good graces by spoiling him; he hid from Mantaro every trace of his past as a champion, wishing to be no more than a mere father to him. Even when Mantaro learned of his father's past, he still treasured the memories of his goofy, caring, simple-minded father.

Suguru is a very childish character. He is also very arrogant and believes himself to be more popular than he is in reality. He complains when he does not get his way, pouts when someone gets more attention then him, and is often downright lazy. Early in the series, he would often refuse to fight certain monsters unless he got something in return. However, underneath this childish behaviour lies a very noble heart, and when times are at their worst, Suguru's courage surpasses that of the greatest of Justice Chojins. He has been known to fight better upon how shameful or dishonourable his opponent is being. He realises honour and friendship has warmed the hearts of several an Evil Chojin. His personality is reflected in his voice in the anime, which deviates between high and screechy and low and serious.

Kinnikuman is a highly muscular man, who wears a mask that has large lips and exaggerated facial features, and the mask also combines with a 'fin' piece that runs down the back of his head. He has naturally dark brown/black hair[3] and blue eyes, with pale skin and very little clothes. If he does wear formal attire, it is usually in the form of unfashionable suits; a white suit to his wedding, a yellow suit with red swirls to dates and sometimes ceremonies. In his old age, he has a large stomach and is completely lacking in muscles.

Suguru is also lecherous and sometimes takes part in matches to impress women. Suguru often flirts with women, and has on numerous times tried to spy on his friends Mari Nikaido and Natsuko Shono. No women find him attractive except for Bibimba. However, when Bibimba first appears, it is a one-sided love on her part and he finds her more annoying than cute. By the time of the Seven Devil Chōjin Arc, he acknowledges her as his betrothed. During the Survivor Match for the Kinniku Throne Arc, he shows great concern for her and admits that he believes they are bound by the 'red string of fate'.

Terryman is the best friend of Kinnikuman. The two meet very early on in their careers, in their early twenties, and are at first antagonistic to one another, but soon they socialise on a regular basis, even with other members of each other's social circles. They form a tag-team that lasts for the entirety of their career, and - even when they temporarily argue or part - always reunite to work together and support each other. They display an unconditional trust and affection, often listening to one another when they would listen to no one else. They are shown to be friends, even into the Kinnikuman Nisei series.

In the beginning of the series, Suguru fights Kaiju by eating garlic and growing 30 meters tall. Despite his great strength and skill, Suguru is clumsy by nature. This causes most people to fear him more than the monsters he fights (due mostly to the possibility of him crashing into buildings while in his giant form). Even though a chojin's' wounds heal faster than a human's wound, it takes him longer to heal than a human.

Kinnikuman grows up alone on Earth, after being accidentally abandoned by Mayumi Kinniku. He is found by Meat Alexandria, and proceeds to mature over time with Meat as his second, leading him to befriend Terryman. Kinnikuman enters a series of tournaments, increasing his amount of friends and trophies, and finally competes in the Survivor Match for the Kinniku Throne Arc, where he proves his worth as a member of the Kinniku Clan and learns of his long-lost brother: Ataru Kinniku. This leads to him proclaiming his love for Bibimba, before assuming the throne as king of Planet Kinniku.

Kinnikuman has aged over time, to the extent he is weakened. He requires his son, Mantaro Kinniku, to fight in his place when the Evil Chojin join forces as the d.M.p to attack Earth. Kinnikuman temporarily steps aside from his royal duties, so that he may go to the Hercules Factory with his son, and even fights against Mantaro as part of Mantaro's final graduation test. After Mantaro's graduation, Kinnikuman is infrequently seen and sometimes appears at vital moments to support his son.

In the Ultimate Chojin Tag Tournament Arc, a pair of Time Chojin go back to 1983. Kinnikuman refuses to believe the Time Chojin or the Time Warp 8 are from the future, before participating with Terryman as part of the Machineguns in the Ultimate Chojin Tag Tournament to defeat the New Generation participants. He eventually loses against the Muscle Brothers Nouveau in the semi-finals, where he realises that the New Generation were telling the truth, and goes on to support them.

Suguru's role in the anime is limited, and mostly replaced by Meat in his role, but he does still fight and lose against his son, Mantaro, so that he can graduate from the Hercules Factory. There is also a flashback in the volume 9 of the manga in which Suguru and Terryman fight before he leaves to become king on Kinniku Planet. The match ends up as a draw.

52 Submissions (52の関節技,, Gojuuni no Kansetsu Waza), Part Two of Prince Kamehame's 100 Special Techniques. He originally meant to teach Kinnikuman them during the Dream Tag Tournament but died before he could, so he used The Omegaman taking his soul and transforming into him as the perfect opportunity.

Face Flash (フェイスフラッシュ, Face Flash), A very special technique that can only be used by members of the Kinniku Clan. Kinnikuman lifts his mask, creating a very bright and powerful flash. It has no specific purpose as it can perform several different tasks. Kinnikuman has used it to cleanse a river (unintentionally), bend metal, shield himself and Robin Mask, attack Super Phoenix, and revive his fallen comrades.

Niku Curtain (肉のカーテン,, Niku no Kaaten), First used during the fight with Warsman. A special defence stance developed by Kinnikuman's grandfather Tatsunori based on Silverman's Perfect Defender technique. Kinnikuman holds his forearms in front of his face in an upside down V. Mayumi claims that it is impenetrable. In the first anime it was called the Kinniku Guard (キン肉ガード).

It should be noted that Kinnikuman's overall wrestling style is based on that of wrestling legend Antonio Inoki, of whom Suguru was a huge fan. The Back Drop and Neck Breaker Drop were used most frequently, the Back Drop is even considered one of his trademarks. Though only used once by Suguru, the Enzuigiri was one of Inoki's most popular finishers.

The majority of Suguru's dialogue is written in hiragana and most of his insults and vulgarities like Kono Yarou (コノヤロー,, You bastard) were written in katakana, with hardly any kanji being used. This was probably meant to represent Suguru's lack of sophistication and intelligence. As the series progresses and he becomes more serious, more and more kanji are used in his dialogue. Suguru's typical way of saying "no" is Iya sa~! (いやさー!, Iya sa~!). He is also known for his humorous cries of pain like Owa~! (おわ～っ!, Owa~!), Gegee~! (ゲゲェー!, Gegee~!), and Da ji ge de~ (だじげで～, Da ji ge de~). 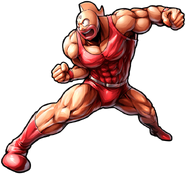 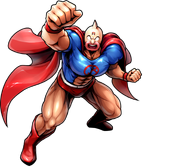