Kinnikuman's Wedding (キン肉マンの結婚式) is the third chapter from Kinnikuman vol. 37.

It is half-a-year after peace is restored, when Kinnikuman has his wedding ceremony. [1]

Kinnikuman is missing on the morning of his wedding, which causes distress for Mayumi Kinniku, and there are only

five hours until the bells chime the necessary 29 times. If Kinnikuman does not make it back in time, it means the wedding will be cancelled and he will forfeit his right to become king (as well as be exiled). [1]

Alexandria Meat is unpacking from Beverly Park, when he comes across Terryman inside his old home with Kinnikuman. It is revealed that the home within the park is being turned into an apartment complex, and Warsman, Brocken Jr., Ramenman, Rikishiman, Robin Mask, and Buffaloman also arrive. They explain that they were all invited to the wedding, but felt it too fancy for 'rustic' people such as themselves. Instead, they came to prevent the demolition of Kinniku House. Kinnikuman arrives with gyudon. [1]

Kinnikuman explains he lied about the demolition so that he could gather together his friends. He knew that they would not attend, but could not get married without a present, and asks them for one final sparring match before his wedding takes place. Rikishiman tries to fight Kinnikuman first, followed by Brocken Jr. and then Ramenman, which leads to the roof of Kinniku House being broken in the process. [1]Warsman fights next, which tears a part of Kinnikuman's mask and exposes his hair. At this point, the 29 bells begin to ring while Bibimba sits alone in her wedding carriage. Kinnikuman then defeats Buffaloman and loses to Robin Mask, and his match with Terryman ends with a draw. [1]

Kinnikuman then manages to arrives just on the 26th chime to Bibimba.

The two are then happily wed. 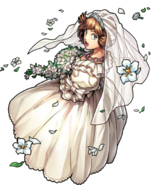