Scramble for the Throne Episode 1

Manga Chapter 272 (First Appearance)
Kinnikuman Super Phoenix, originally Phoenixman, was one of the Five Fated Princes and the main antagonist of the penultimate story arc of Yudetamago's manga series Kinnikuman.

Super Phoenix is one of six - including Kinnikuman - boys that were born in hospital on April 1st, 1960. He was raised in poverty and lived jealous of Kinnikuman, but was gifted with a vast level of intelligence. He was later granted special powers by God of Intelligence, which he used to enter a tournament to decide the future king to Planet Kinniku in the Survivor Match for the Kinniku Throne Arc.

Super Phoenix was born Phoenixman, in the same hospital and on the same day as Kinnikuman and four other boys. A fire broke out in the wing of the hospital where they were being kept and in the chaos they may have been mixed up leading to confusion over the identity of the true heir to the throne of planet Kinniku. Phoenixman grew up poor and alone, hoping that he could prove himself to be the heir and be taken away from his misery.

He had planned on entering a tournament to become the next successor to the throne, but was unable to gain sponsorship by the death of his father (King Tōn, the pig that was mistaken for the real Kinnikuman, is believed to have won this tournament). Phoenixman's misery only increased when Kinnikuman was revealed as the prince of planet Kinniku, as he was (in Phoenixman's eyes) an idiot who got money and recognition without working for them, while Phoenixman was intelligent and had to struggle to survive. He hated Kinnikuman with a passion and trained vigorously to one day defeat him and take the throne. He would eventually develop a deadly heart disease, but ignored it in order to continue his training.

Scramble for the Throne Arc

When Kinnikuman had proven to his family that he was worthy to become the next king because of his various championships and victories over Akuma Chojin, five evil gods began to fear his interference in their plans. They decided to seek out the five other possible heirs and have them present their claims to the throne as well, resulting in a Survivor Series to determine the most worthy successor. Phoenixman was chosen by the God of Intelligence (知性の神,, Chisei no Kami) to be his champion against Kinnikuman's ascension, and he relished the chance to get revenge on Kinnikuman and claim the throne he believed was rightfully his (shortly before this, his dying mother had told him that he might be the true prince). He became Kinnikuman Super Phoenix and gathered a team of powerful, ruthless Chojin to assist him.

In the first round of the tournament, Super Phoenix's team was pitted against Kinnikuman Big Body and his team in Aizuwakamatsu Castle. Phoenix's ally Mammothman tore through Big Body's teammates before intentionally tying with the last one to allow Phoenix to battle Big Body. Phoenix quickly defeated Big Body with the Muscle Revenger, an attack supposedly only usable by members of the royal Kinniku bloodline.

Team Super Phoenix's next round was against Kinnikuman Soldier (really Kinnikuman's brother Ataru Kinniku) in Nagoya Castle. Satan Cross fought and killed The Ninja and tied with Asuraman, and Phoenix, Mammothman and Prisman took on the remainder in a six-man match. Prisman and Mammothman were ultimately taken out of the fight at the cost of the lives of Buffaloman and Brocken Jr. respectively, leaving Ataru and Super Phoenix to finish it. Though Phoenix had burnt Ataru's Muscle Prophecy page (causing him to begin to disappear from existence), Ataru managed to put him into a Muscle Spark, more to show his brother a technique powerful enough to defeat Phoenix than to beat the challenger to the throne himself. Phoenix gained the upper hand and killed Ataru with a Muscle Revenger, and soon after Ataru disappeared.

In the finals in Osaka Castle, Satan Cross and Prisman fell to Kinnikuman and Ramenman respectively and The Omegaman defeated Geronimo. The final match would be a six-man tag match with Super Phoenix, Omegaman, and Mammothman opposing Kinnikuman, Robin Mask, and Neptuneman (The Samurai), but Phoenix came up with two new stipulations. The first was that each fighter would hang their Muscle Prophecy page over a fire by a string, and those strings would be tied along with several others to the ring ropes. To prove the effectiveness of this, he burnt Geronimo's page, causing him to disappear. The second was that the winner not only got the throne, but also Bibimba's hand in marriage. Although this seemed to be just another part of Phoenix trying to take everything from Kinnikuman, he shows real concern for Bibimba and calls a short truce with Kinnikuman in order to go save her when she falls from the stands. He also stops Harabote from making a 20-Count when Kinnikuman leaves the ring to heal her with his Face Flash.

After Robin and Neptuneman have been erased and Mammothman and Omegaman have been defeated, a fierce one-on-one commences between Kinnikuman and Super Phoenix, in which Phoenix revealed that he can perform the Kinniku Clan's Face Flash technique. When it seemed like Phoenix would win and he had burnt Kinnikuman's Muscle Prophecy page, his mother Shizuko arrived. She reveals that she had only told him that he might be the real prince so that he would feel better about his life and that the only reason he can perform the Face Flash is because she washed his face in the sacred Kinniku Clan's Muscle Falls when he was a baby.

Phoenix refused to believe this and tried to defeat Kinnikuman with the Muscle Revenger but his heart disease begins to act up. During this, the souls of those erased by Phoenix (Ataru, Robin, Geronimo, and Neptuneman) went to the Temple of the Evil Gods where Kinnikuman's Kajiba no Kuso Djikara was sealed and freed it. Because of this, Kinnikuman and his page were revived and he broke out of the Muscle Revenger and defeated Phoenix with a Complete Muscle Spark. When the Chojin Gods demanded Phoenix be erased, Kinnikuman strongly requested otherwise and revived his erased friends and the murdered Team Soldier. After he is given the throne, Kinnikuman revives Phoenix with a Face Flash and holds him in his arms, recognising Phoenix as a friend. In the interim period, between the Throne arc and the True Akuma Chojin arc, Kinnikuman offered Super Phoenix a position in his government, but Super Phoenix refused every time Kinnikuman made that offer.

During the Omega Centauri's Six Spears arc, he was seen working a field on a desolate planet. He's also grown off-screen. The God of Intelligence appears and told Super Phoenix that he must descend to Earth once again as his friend has been shaking things up behind the scenes. After the Fated Princes (minus Kinnikuman Soldier) reclaimed their masks from the Chojin museum, they arrived at the Sagrada Familia. Super Phoenix and the others revealed that they're there to kill the Six Spears. Also, Super Phoenix revealed Dexia infiltrated Super Phoenix's team as part of a mysterious plan.

For the death matches, Super Phoenix revealed 5 arenas in 5 ancient castles all over the world. Omegaman Aristera wonders how Super Phoenix knows about their history in the first place. Super Phoenix's opponent was Aristera, and their match took.place at Azuchi Castle.

During the match, Super Phoenix angers Aristera by saying that his accidental murder of Dexia and subsequent loss against Kinnikuman was great because he put a wrench in the Six Spears' plan. However, Aristera won't stand for the Six Spears' pride being insulted and demonstrates the Omega Apocalypse Crash on Super Phoenix.

Super Phoenix survived the attack by calculating a way out of it. He proceeded to make a comeback by using his intelligence against Aristera's overwhelming power and demonstrated the Phoenix Thunder Storm grapple on him. This causes the ring to crash into the roof of Azuchi Castle, revealing a portal into the Chojin Graveyard.

It is revealed the Six Spears' ancestors built the precursor to the Azuchi Castle as a way to gain access into the Chojin Hakaba. Oda Nobunaga would follow in the ancient Chojins' footsteps, but The Man sent visions into Akechi Mitsuhide's mind and coerced him into betraying Nobunaga. Aristera asks Super Phoenix to join them in their quest to kill The Man and the other Chojin Gods, but Super Phoenix refuses.

Despite his advanced skills, Super Phoenix was unable to damage Aristera significantly. Aristera even managed to reverse the Muscle Revenger with the Giant Glove Cutter technique. To make matters worse, The God of Intelligence showed up. Even though Phoenix refused his offer to be possessed, Phoenix changed his mind after seeing the large gap in power between him and Aristera. With this new boost in power, Phoenix was able to make another comeback in the fight.

When Super Phoenix attempted to finish off Aristera with a super-powered Muscle Revenger, Lunaight, Hailman and Gear Master's souls appear on Aristera's Omega Hand and channel their Friendship Power into Aristera, giving him the strength to take on Super Phoenix. They tell him to never give up on their hopes before vanishing.

Super Phoenix asked how he managed to get a grasp on Friendship Power. Aristera explained he obtained that power through the hopes of his Omega Centaurians and broke out of the Muscle Revenger. Aristera somehow planned for Phoenix getting possessed by the God of Intelligence. He boasted that he'll be the first one to beat a god in combat.

Super Phoenix realised that Aristera is like Kinnikuman in that he has the same infinite potential as him. Aristera hated that Chojin were stuck with the Chojin Kyodo they were born with and sought to change that by fighting powerful Chojin and connecting with them. Aristera was glad that the Gods focused on Kinnikuman, allowing Aristera to build up his power in secret. Aristera pulled off another Omega Apocalypse Crash on Super Phoenix.

The God of Intelligence reminded Super Phoenix that has the power of a God behind him. Super Phoenix should be able to recover from this. Super Phoenix does another Muscle Revenger, but Aristera was able to reverse that into a modified Omega Catastrophe Drop, the Omega Armageddon Avenger. Just before he passed out, Super Phoenix revealed that he chose to fight Aristera and the Six Spears because he was humbled by Kinnikuman's kindness and that the Omega Centaurians and the Man were former allies.

Also, Super Phoenix suggests that the Six Spears were being used by a greater being and pities the Six Spears because of it. Aristera tells him to shut up and chokes him. Aristera believes that The Man changing doesn't mean the crimes he committed against the ancestors of the Omega Centaurians will vanish. Aristera only wants The Man to atone for those crimes. In response, Super Phoenix thinks that Aristera knows nothing about The Man's love for Chojin and that all Chojin would thank the Man if they learned about what he did.

When Kinnikuman woke up after his fight against Pirateman, he is dismayed to learn that Super Phoenix would lose to Aristera. Aristera attempts to intimidate Kinnikuman by claiming that the power of the Omega Centaurians is untouchable. That just motivates Kinnikuman to get revenge for Super Phoenix's loss.

Miraculously, he survived his fight against Aristera. When the God of Harmony's faction invades Earth, he announces that the greatest threats Earth will face are here.

Just as Rampageman and Kinnikuman Big Body get ready to fight, Kinnikuman Super Phoenix appears on a nearby monitor and tells Big Body to stop.

As it turns out, Super Phoenix wanted Big Body to form a tag team with him. 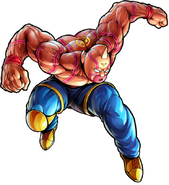 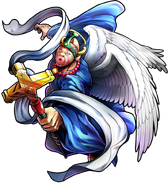 Retrieved from "https://kinnikuman.fandom.com/wiki/Kinnikuman_Super_Phoenix?oldid=35705"
Community content is available under CC-BY-SA unless otherwise noted.