Scramble for the Throne Episode 3

Chapter 276
A chojin in the form of a military tank.

Leopardon is a tank chojin (specifically a leopard tank) who appears in the final story arc of Kinnikuman. He is the Second Guard of Kinnikuman Big Body's Throne Scramble Team. Leopardon attempts to battle Mammothman but is swiftly defeated in a single blow.

Virtually nothing is known about Leopardon's personality.  His time in the series is brief, with the tank chojin being introduced and defeated within seconds. Leopardon does not utter a single line of dialogue. It can be inferred that he believed Kinnikuman Big Body was fated to become ruler of Planet Kinniku, as he voluntarily joined Big Body's team.

Leopardon appeared to be a loyal and unquestioning soldier, immediately jumping into battle at his leader's command. However, Leopardon also seemed to be cocky and lacking in foresight, believing his abilities sufficient to handle Mammothman and attempting to ambush him with little planning immediately after watching Pinch Man be demolished by the mammoth chojin.

Leopardon is a gargantuan chojin in traditional pro-wrestling style attire, which features trunks, wrist gauntlets, and a mask. The mask, which covers his entire face, is emblazoned with the Iron Cross. Leopardon also wears what looks to be the gun of his namesake (a leopard tank) strapped to his back, with the straps running from his shoulders down to his trunks. Leopardon towers even above his team leader: Kinnikuman Big Body.  In the manga, Leopardon's entire outfit is a uniform green color, resembling that of a traditional army tank. He wears gauntlets on his wrists and ankles, and they are all marked with the Iron Cross. His trunks feature the Iron Cross three times in a horizontal line. All of the crosses on Leopardon's gear in the manga are intended to be a bright crimson. The straps on his chest as well as his gun are also the same dark green. Leopardon is shown to be barefoot in the manga, and his left arm is replaced with a gun that looks similar to the one on his back. Overall, Leopardon's manga design closely resembles the color scheme of an actual tank.

Interestingly, Leopardon's manga and anime designs drastically differ. Leopardon's anime look is much less consistent - His mask is bright red, with a black Iron Cross outlined in yellow. The gauntlets on his wrists are bright red with a black trim. His trunks are still dark green, but do not feature the trio of Iron Crosses. The Iron Crosses are absent from his wrist gauntlets as well. Leopardon is also shown with plain black boots in the anime. He is not barefoot. The straps holding Leopardon's gun are now red and black with a yellow pad, and are much less detailed than in the manga. Leopardon is considerably more slim in the anime. Leopardon's gun hand is also gone. Both hands are normal in the anime. Leopardon's anime color scheme is much more vibrant than the manga, but lacks consistency.

Leopardon is introduced in full during the first round of the Survivor Match for the Kinniku Throne. In the first round, Team Big Body is matched up against Team Super Phoenix. The Advance Guards of the respective teams, Pinch Man and Mammothman, battle in the opening contest. Mammoth Man defeats Pinch Man with little effort.

Kinnikuman Big Body orders Leopardon into the ring after Pinch Man's defeat to continue the match. Leopardon happily complies, cackling maniacally as he rushes to battle. The massive tank chojin displays a good deal of speed and agility, managing to momentarily shock Mammothman by slipping behind him and attempting an attack from the rear.

However, Mammothman's reflexes and strength prove too great; Mammothman mounts a powerful counter before the tank chojin can attack and pierces through Leopardon's chest with Nose Fencing, instantly killing him.

Between the Survivor Match for the Kinniku Throne arc and the invasion of the gods, Leopardon is brought back to life. After his teammates have been beaten at the hands of Rampageman, Leopardon steps in for Kinnikuman Big Body. Despite being completely outmatched by Rampageman, Leopardon's loyalty towards Big Body is far greater than his fear of dying to Rampageman. Big Body and others even cheer for the tank Chojin. Even after getting impaled with a Punishment Engraver, Leopardon is still determined to fight. 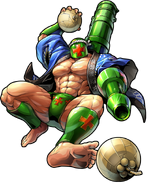 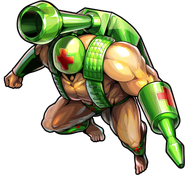 Retrieved from "https://kinnikuman.fandom.com/wiki/Leopardon?oldid=33496"
Community content is available under CC-BY-SA unless otherwise noted.