Chapter 30 (2011)
A Perfect Chojin with two dragon heads on his shoulders.

Marvellous is a Perfect Chojin that has two dragon heads upon his shoulders, which he uses in battle, and is an expert at kenpo in battle. He is matched against Ramenman, but is ultimately defeated by him and commits suicide using the dragon heads to tear out his heart.

Marvellous appears with the second group of Perfect Chojin, led by Nemesis. [2] When Geronimo attacks with his Apache War Cry, Marvellous - after Jak Chi attacks - bites Geronimo with his dragon heads, and slam Geronimo down onto his knee. [3] He and his teammates then form a giant gun, before shooting themselves out onto a seven-step pyramid for a new tournament. [4] He awaits on the first step, where he is confronted by Ramenman. [5]

Ramenman opens the match with a drop-kick, but Marvellous blocks the attack with ease. Marvellous tries to sweep at his ankles, but Ramenman instead lands a kick to his head, and Marvellous hits the mat hard. [5] When Ramenman becomes distracted by the match between Brocken Jr. and Crushman, Marvellous tries to attack and is countered, forcing him to use the Rising Dragon technique. [6] Marvellous then uses a Hold Triangle Side, and Ramenman - trying to inspire Brockenman - breaks the hold and strikes back. [7]

They exchange a series of blows, as Ramenman struggles with Crushman's death, and Marvellous steadily gains an upper-hand. [8] He mocks Ramenman for once having been a Zangyaku Chojin, before using Rising Dragon once more and follows with a Twin Dragon Coil Hold. [8] This starts to tear Ramenman in two pieces. [9] Ramenman is soon able to free himself and takes Marvellous into a Camel Clutch, but he switches then to a Sleeper Hold, and then exchange blows until both their backhand chops strike at the same time. They then start to mirror one another's techniques in perfect unison, and Marvellous reveals he is also an expert in Kenpo. [9]

It seems that Marvellous is winning, after crushing Ramenman against the wall of the pyramid, until Ramenman counters with a Flying Leg Lariat. [10] Ramenman reveals that he doesn't consider Marvellous worth killing, and Marvellous attacks his head-scar left by Warsman. The dragon on Marvellous' arm attacks of its own accord, forcing him to punch it into submission, and this reveals that Marvellous only fights fair and without dirty tactics. After they continue their match, Ramenman finally uses a Wall Drop technique. [10] This finally decides the match and Ramenman is declared the winner. [11]

At first, Marvellous cannot hear Nemesis' command to commit suicide, as he lies asleep, but - when he awakens - the dragon head dives for his heart and tears it open. Ramenman destroys the head, but it's too late and Marvellous is dead. [11] 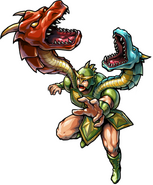