A Perfect Chojin that works alongside Strong the Budo. He is chosen as the first opponent of the Seigi Chojin, where he fights against Terryman, and - after a long battle - is defeated by Terryman, before choosing to commit suicide in shame at his defeat. He is permanently deceased.

During Chojin Fan Appreciation Day, Max Radial appears with a group of Perfect Chojin from the air. [1] He and his group announce that the Hell Missionaries were just advance troops, whereas they hold true power. [2] After Geronimo is defeated by the other Perfect Chojin, Max Radial attacks both Specialman and Canadianman with his Tackle Drift. [3] He follows this with a Big Radial Impact. [3] A tournament is then announced between the Perfect Chojin and Seigi Chojin. [4]

When Terryman challenges the group, they make him pick the name of his first opponent by chance: Max Radial is his opponent. [4] The match takes place at the Tokyo Dome. [5] Terryman attacks from the red corner, before the match begins, before landing a storm of punches and proceeds with a Spinning Toe Hold. It is revealed Max Radial's legs are made from suspensions, so the leg hold has no power, and he tightens them and releases them so that Terryman is sent flying in the distance. Terryman attempts a Calf Branding, but Max's tires stop his face from making contact with the ring canvas. [5]

Terryman is attacked by a Drift Tackle, but - when he stands - his body is torn with slashes from the tires. [6] Terryman attempts to counter with an Oklahoma Stampede-styled Throw, but Max stops this with a Big Radial Fin. Max attacks again and again, until Terryman's skin is ripped into shreds. Even after Terryman faints, he stands and prevents another Drift Tackle. [6]

It is revealed that Terryman has been wearing down the tires on Max Radial's shoulders, which is where Terryman starts to focus his attacks. [7] Terryman manages to scrape the rubber from the tires, before exploding the tires. He is finally able to use a Calf Branding attack and a Texas Condor Kick, before winning with a Tenacious Blow. [7] Max Radial then commits suicide using a bamboo sword, which disembowels him. [8] 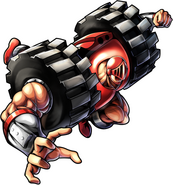