Chapter 3
Alexandria Meat (アレキサンドリア・ミート/Arekisandoria Mīto), or Meat-kun (ミート君/Mīto-kun) as he is frequently called, is a main character in the Kinnikuman franchise. He is Kinnikuman's best friend and trainer, as well as the son of Mince, and later goes on to personally train Mantaro Kinniku.

Meat is of Planet Kinniku's Churrasco Clan whom was entrusted by his father Mince to King Kinniku Mayumi of the Kinniku tribe for the greater good of the planet. Meat then is sent to Earth to retrieve the long lost prince Suguru Kinniku (Kinnikuman, known as Suguru Muscle in Ultimate Muscle). He serves as Kinnikuman's eyes and personal assistant. In the early days he and Kinnikuman frequently quarrel with one another, usually because of Kinnikuman cowardice and/or laziness. They would also often fight over Mari Nikaido's affection.

In Kinnikuman Nisei, he has cryogenically frozen himself in Beverly Park, leaving him with an unchanged appearance, so as to serve Kinnikuman's son Mantaro Kinniku.

He wears glasses and has the hiragana characters Niku (にく, Meat) on his forehead. Also, although a member of the Churrasco Tribe, he has the Kinniku Clan's KIN Mark (KINマーク, Kin Māku) on his chest that is similar to the old JIS Mark 〄.

His glasses are his weakness, whenever they are broken he ceases to function. Also, when he presses his temple a bright light shines from the Niku characters on his forehead.

Meat Alexandria was born to Mince of the Churrasco tribe, but due to his high IQ he was given to the Kinniku Clan and raised to be Kinnikuman's faithful servant. At first his parents refused, but reluctantly accepted after they realised it would be better for the sake of justice. After King Tōn took over the Kinniku Clan throne, Meat was dispatched to retrieve Suguru. Unfortunately, upon arrival on Earth, he found that his prince was a pathetic idiot. Despite this, and his failure to defeat Tōn, Meat remained on Earth with his master. When the Chojin Olympics came, Meat was made the official mascot.

Upon their return to Planet Kinniku for New Years', Meat was kidnapped by the Horumon Clan, but was freed when Suguru defeated Bibimba. Soon after, everyone (including the now-good Bibimba) returned to Earth, where the Second Olympics were being held. Meat offered advice and support to his master, as with the previous Olympics.

After the tournament, the 7 Devil chojins arrived and challenged Kinnikuman to a fight. He refused, and Buffaloman split Meat into seven pieces (one for each Devil). The only way to get him back would be to defeat the 7 and put his body back together within 10 days. In due time, the Devils were defeated, and Meat was reassembled. The boy continued to assist Kinnikuman through the Golden Mask and Dream chojin Tag arcs. Initially, he was his master's only teammate in the Survivor Match for the Kinniku Throne.

When Suguru lost to Mixer Taitei, Meat took over and defeated him with a Back Drop. However, he then lost to King The 100 Ton, a loss that would have meant disqualification. However, before that could happen, Terryman and Robin Mask arrived and revealed they had secretly signed up to fight for the team. They defeated Team Mariposa for Kinnikuman. In the next round, Meat was almost damned to Hell by Team Zebra's fighter, The Manriki. He was saved when Warsman leapt from Hell and killed The Manriki. Afterwards, Meat was too injured to fight anymore, so he instead looked up information on Kinnikuman Super Phoenix and discovered that either Suguru or Phoenix had a heart disease.

After Suguru took his rightful throne, Meat was sure Evil Chojin would return and had Kinkotsuman put him in cryogenic sleep so that he could serve Justice Chojin of the future. A flashback explains that Kinkotsuman was the one who built Meat Alexandria's cryogenic sleep device. [1] Meat said it was necessary in order for him to help the New Generations in the future to come.

He is awakened by Kinkotsuman, but in the anime this is changed to being accidentally awakened by Kinnikuman and Bibimba's son Mantaro Kinniku, whom he then helps defeat d.M.p member Bone Killer. As with Suguru, Meat accompanies Mantaro nearly everywhere, advising and training him.

It is during the Mantaro Kinniku vs. Bone Cold match that Mince reveals he knows Bone Cold's secret. [2] Bone Cold reveals that Mince is Meat's father, after having sold his son to the Kinniku family for money, and - as Mince tries to stop the revelation from going further - he is stabbed in the stomach by Bone Cold. [2]

Mince reveals to Meat that Bone Cold was partially telling the truth, but that he loved Meat very much, and that they only gave Meat away so that he could protect the universe. [3] Mince reiterates that he loves Meat and always watched over him, and he can pass happily knowing his son became such a great Chojin, before he dies in Meat's arms. [3] Mince's body is taken to a chapel of rest. [4]

He accompanied Mantaro to the Chojin Olympics: The Resurrection.

In this last round of the Chojin preliminaries, Ilioukhine takes part in a three-legged race, his partner being Meat Alexandria. Ilioukhine, satisfied about his partner and confident about this race, speedily runs through the race, without any sort of struggle, thanks to advice coming from Meat. Halfway through the race Ilioukhine gets in a quick fight against Jade, but ends in a draw, due to the amount of time they have in finishing the race. Ilioukhine and Meat finish the race, coming in second place

After Ilioukhine's semi-finals match with Kevin Mask, Ilioukhine is thrown from the ring by Kevin Mask and almost crashes into the ground (where he will be killed by the impact of the fall), but Meat intervenes and catches him. [5] This saves Ilioukhine's life, but - as a result - he is too injured to assist Mantaro during his finals match against Kevin. [5]

Buffaloman meets with Meat and goes with him to check a disturbance.

He collapses when Alexandria Meat is taken by six tendrils, much like what happened to him 36 years ago, and the six people reveal themselves to be the ultimate Devil Chojin: the Demon Seeds. [6] This time his body parts will be added to a cauldron and create a new body for General Terror. The Constellation takes Meat's torso; he taunts Mantaro with Meat Alexandria's torso, before tossing it out of reach onto a high column. [7] After Buffaloman offers advice to Mantaro, The Constellation proceeds to use a shattered part of the corner-post to incapacitate Buffaloman and knock him unconscious. [8] He follows with accidentally knocking down Meat's torso. [8]

The following match to regain a piece of Meat is between Hanzo and Gepparland. [9] Gepparland throws a part of Meat Alexandria high onto a column, before he bites into Hanzo's throat to drink his blood. [9] The General Stone inside Gepparland flees his body on his defeat, as the disembodied voice of Satan chastises him, and the horn of the mountain structure falls down, which impales both Gepparland and Hanzo. Before Hanzo dies, he throws the box with Meat's body towards Mantaro to be kept safe. [10]

In the match between Meltdown and Ilioukhine, Meltdown - unmoved by Ilioukhine's friendship with Meat Alexandria - smashes open the box containing Meat's right arm, and dangles it over a boiling cauldron by a rope, and below the rope is a candle. [11] This puts the match on a strict time-limit. Meltdown uses psychological tactics to dissuade Ilioukhine from fighting, which includes making him believe that Meat hates him and would rather not be saved. [12] He reveals the melting pot - over which Meat's arm hangs - is the Pot of Demon Summoning; the innocent will not be harmed by it, but the guilty will, which means that Meat's arm will not be damaged so long as Meat wishes to be saved. The steam is already burning the arm. [12]

Ilioukhine is attacked again by the Demolition Horn, but Mantaro Kinniku reveals Meat's moving torso. [12] Ilioukhine is reinvigorated by the sight of Meat cheering him on, even when he brought nothing but trouble to Meat, and he no longer doubts himself in the face of Meltdown's psychological warfare. [13] An attack by Ilioukhine was so powerful that Meat's arm falls from the rope, but - even when it hits the liquid - it is fine as Meat trusted Ilioukhine. [13] Meltdown lies broken, but finds enough strength to hit a switch that will send the ring back to 'hell' underground, but Ilioukhine and Meat remain in the ring. [14] Shackles attach to Ilioukhine's feet, while Meltdown's General Stone flees his body. Ilioukhine accepts his fate, but sends Meat's arm across the sea using a Jet Blast, until it reaches Kevin. [14]

Later, The Tattooman lifts stone bleachers for the fans, and reveals he holds Meat's right leg. [15] He puts Meat's right leg in a hovering glass sphere over a post of the ring. Five canons are revealed at each point of the pentagon, which were used to kill slaves trying to escape, and they will explode Meat's leg within thirty minutes. [15] Barrierfreeman tries to save Meat's leg, as he awakens, but The Tattooman uses a stone grinder to capture Nils' arm, and - with only 20 seconds to go - Georgioman and Nils separate so that Meat can be saved. [16] Nils dies alongside The Tattooman, while Georgioman saves Meat's leg, which he manages to throw back to safety just as the canons explode. [16]

Voltman is the penultimate match, alongside Asuraman, as they form a tag-team. [17] Voltman makes the last two parts of Alexandria Meat's body levitate above two corner posts, namely his left leg and his head. [17] Mars loses the match, at which point Voltman jumps into the air to release Meat's body parts, and claims his leg in the aftermath. [18] Voltman and Asuraman proceed to flee to the last palast, where they await their final match against Kevin Mask and Mantaro Kinniku. [18]

Through the following efforts of Mantaro and Kevin, the rest of his body parts are retrieved and he is put back together.

In the Ultimate chojin Tag Arc, Meat is sent by Harabote Muscle to the Tournament Mountain in order to find the Alexandria Family Library and possibly learn why Kevin Mask is fading away. When he arrives, he finds a statue of his ancestor Musaka. The statue begins speaking to him and then accesses his brain, informing him of everything he needs to know of the situation. Meat then assembles all of the New Generation and announces plans to build a time ship with pieces from the Fujiyama TV Building (parody of Fuji Television) and the Tokyo Jumbo Sight (parody of Tokyo Big Sight) and using the horns of the Jikan (Time) chojins as fuel. Meat does not go along on the journey for fear that he could create a time paradox if he touches his past self, but he gives Terry the Kid a special pair of glasses to give his past self should trouble arise.

Meat goes into another cryogenic sleep for the same reason in Kinnikuman Nisei, to help the future Chojin defeat the evil Chojin. However, instead of freezing in time, the cryogenic machine places him in a deep sleep where his mind transfers into an alternate universe where all of the famous wrestlers are women. When he awoke, he meets with his new protege, Kinniku Lady; the female version of Kinnikuman. Just like the original Kinnikuman manga, Meat will train Lady to become the next Wrestling Champion and defeat the evil Chojin of this world. 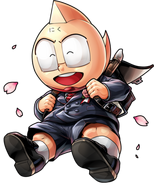 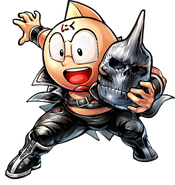 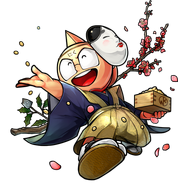 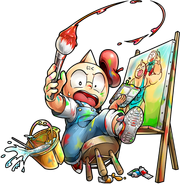 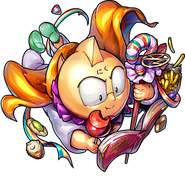 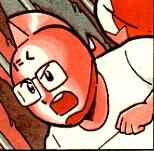