Meltdown (メルトダウン) is a robo-chojin member of the Demon Seed.

Meltdown (メルトダウン) is a Robo Chojin who can transform into a motorbike. He fights against Ilioukhine and torments him with psychological warfare by threatening to drop Alexandria Meat's right arm into the boiling pot below their ring.

He uses his Chojin Navigation (超人ナビゲーション) system to learn the weaknesses of his opponents. His Chojin Navigation relies on an electro-magnetic wave from a satellite, and when this weakness is attacked he is defeated with The Turbulence. Afterwards, the special ring collapses and he and Ilioukhine fall to their deaths.

The Demon Seed reveal there are General Palasts across Japan, and - after using tentacles to kidnap the Army of Idols - take their individual opponents to their specific Palasts. [1] The General Palast breaks into five pieces, with each Death-Match Room going to the new locations. [2] Meltdown takes Ilioukhine via tentacles to his room, which moves to Shimane's Izumo region, where the General Foot lands on the coast. [3]

It is revealed there is a large structure beneath the ground, and there are two large 'legs' of General Foot are pillars that are attached to an underground chamber, seen through Ilioukhine's sonar. [4] Meltdown reveals the subterranean chamber was created by Akuma Chojin in the past, which acts as a portal to hell. The subterranean chamber rises onto the pillars/legs, where a ring is shown to be inside. [4]

Meltdown - unmoved by Ilioukhine's friendship with Meat Alexandria - smashes open the box containing Meat's right arm, and dangles it over a boiling cauldron by a rope, and below the rope is a candle. [5] This puts the match on a strict time-limit. They begin the match, as Meltdown dodges a Flying Knee Kick, and lands a Rolling Sobut counterattack. He pins Ilioukhine to the mat with an Arm Lock. [5] They engage in a series of blows, until Meltdown traps Ilioukhine in a Triangle Hold, but - as Ilioukhine escapes - Meltdown reveals it was a trap and uses an Omoplata. He continues to aim for the arms, as these were destroyed by Kevin Mask and still not healed. [5]

They exchange in a further series of blows, until Ilioukhine hides himself in stealth mode, and Meltdown counters by turning into a motorbike that can detect his whereabouts. [6] He uses a GPS like system to track down Ilioukhine, after which he uses his Demolition Horn to deliver an attack. [7] The attack is followed by a Die-Version Sidecar, which sends Ilioukhine hurtling to the mat. [7] Ilioukhine is injured enough that his wound from three months ago reopens; Meltdown uses a Guillotine Drop, but Ilioukhine counters with a Flying Knee Kick. [8] Meltdown uses his navigation system to detect more weaknesses of Ilioukhine, before using his Double Tube Attack to aim for his arms, and then follows with a Palo Special.

Meltdown uses psychological tactics to dissuade Ilioukhine from fighting, which includes making him believe that Meat hates him and would rather not be saved. [8] He reveals the melting pot - over which Meat's arm hangs - is the Pot of Demon Summoning; the innocent will not be harmed by it, but the guilty will, which means that Meat's arm will not be damaged so long as Meat wishes to be saved. The steam is already burning the arm. Ilioukhine is attacked again by the Demolition Horn, but Mantaro Kinniku reveals Meat's moving torso. [8]

Ilioukhine is reinvigorated by the sight of Meat cheering him on, even when he brought nothing but trouble to Meat, and he no longer doubts himself in the face of Meltdown's psychological warfare. [9] He decides to attack first, while Meltdown enters his Demolition Sidecar once more, and Ilioukhine counters with Virtalyot Genetics. He aims the attack for the stairwell to the ring, which creates a stone tunnel, and this prevents Metldown's GPS system from finding Ilioukhine. [9] Ilioukhine demolishes his own tunnel, attacking Meltdown, and carries him high into the air to perform the Turbulence attack.

Meltdown's fusion reactor cools down. The attack was so powerful that Meat's arm falls from the rope, but - even when it hits the liquid - it is fine as Meat trusted Ilioukhine. [9] Meltdown lies broken, but finds enough strength to hit a switch that will send the ring back to 'hell' underground, but Ilioukhine and Meat remain in the ring. [10] Shackles attach to Ilioukhine's feet, while Meltdown's General Stone flees his body. Ilioukhine accepts his fate, but sends Meat's arm across the sea using a Jet Blast, until it reaches Mantaro.

Ilioukhine and Meltdown are both dragged down to their deaths. 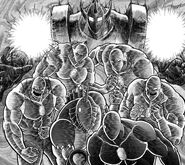