Charsiuman was Victory Ramenman's elder disciple, but because he was not chosen to inherit the Touryuu Gokui Sho he ran away. Several years later he and Ramenman have a showdown, but he is defeated by the Moudatsu Houkai Ken. Though he seems to die, he reappears afterwards and competes in Emperor Wan's Tournament, only to be defeated by Dokuroken Gundam. 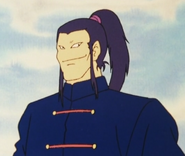