Manga Pilot 1
Okamorous is a kaijuu that develops a crush on Kinnikuman. They are initially an antagonist, but proceed to help Kinnikuman in a time of trouble.

Okamaras is a feminine kaiju that develops an attraction to Kinnikuman. The name is a pun, which combines the words okama and 'amorous' . They first appear as the antagonist of the pilot chapter, but later reappears in the first serialised chapter as one of the invading aliens and again as one of Kinkotsuman's minions. They appear to have a crush on Kinnikuman, and their feelings for Kinnikuman lead them to allow Kinnikuman to escape from Kinkotsuman's prison.

When all other chojin are busy, Kinnikuman is called upon to stop a group of space kaiju from attacking Earth. [3] Okamorous is shown on a slideshow to Kinnikuman, but Kinnikuman expresses a confidence in easily defeating Okamorous, but - when the fight is due to take place - Okamorous and the other kaiju reveal they have returned home, as they do not wish to fight Kinnikuman. [3]

Later, Kinnikuman is invited to a party in an old manor house, which he attends alone. [4] Kinnikuman is trapped in a cage, when a group of kaiju reveal that this was a trap all along and that the women who enticed Kinnikuman to the manor house where kaiju in disguise. The kaiju beat Kinnikuman and throw him into a jail cell, but Okamorous appears and expresses relief that Kinnikuman remembers them, before revealing they are in love with Kinnikuman. [4]

Okamorous helps Kinnikuman to escape by flirting with Iwao, and then - when they notice Kinnikuman running away - spills oil to stop the others from catching up with him, before yelling at him to use his Kinniku Flash. Okamorous is relatively unharmed, as they state that their love for Kinnikuman is stronger than any flames. [4] 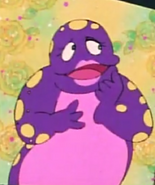