The Perfect Chōjin are the very first chojin faction to ever exist. They were a group founded by The Man, the fomer God of Compassion.

They are an ancient faction of chojin. They train to the point were they transcend emotions, and follow strict rules in regards to what happens should they be defeated. They were founded by the Man, and the original members of their group comprise of the Perfect Origin.

In the ancient past, chojin grew bold and did nothing but quarrel and fight; the chojin gods decided to unleash in the cosmos the deadly Capillaria Ray. This was a mysterious energy (later employed by Prisman) that was able to effortlessly kill every chojin, but spared other lifeforms.

A merciful god (taking the identity of the The Man) took pity on the chojin race, and chose to save ten perfect chojin: the Perfect Origin. He cast off his godhood (but not his immortality) to grant them his teachings and the ability to be "a new origin" for the chojin race. The Perfect Origin are immortal beings shrouded in the ancient past of chojin history.

Unbeknownst to the merciful god, some Chojin were able to escape from the Capillaria Rays and rebuild their society, hiding under the shade of a huge tree, the Unforgiven Yggdrasil. The Man never forgave them, feeling them as tainted as the bold Chojin his brethren once tried to destroy.

During the centuries, the Merciful God lost his mercy and his heart and became Chojin Enma and then Strong the Budo. He was hellbent on destroying the lesser chojin once he knew of them, and built the Chojin Graveyard to put them further under his control. He only accepted only the Perfect Origin and their descendants as the true inheritors of his will.

Two brothers in the Perfect Origin - Goldman and Silverman - left the Man, as they grew strongly disappointed by seeing the Merciful God losing himself. Goldman outright chose to oppose The Man, aligning with Satan and becoming General Devil, while Silverman asked The Man to let him pass down some of his teaching to a group of good-nature chojin in the Mortal Realm that sought for guidance.

The Man accepted Silverman's request, believing the newly minted Justice Chojin would be loyal enforcers to the Perfect Chojins' will in the mortal world, little more than Silverman's pawns. Silverman, however, gave them free will and entrusted them with his search for mercy and justice, thus starting both the Justice Chojin and the Kinniku Clan.

Dissent grew in the ranks of the Perfect Origin, but no one dared to directly oppose The Man. Psychoman even tampered with a machine that was devised by the Man to end the lives of the Perfect Chojin (if the Man felt that they were going too far and too bold); Psychoman rigged it to take his own life and spare his entire brethren, fearing for the Man's choices. This came to pass during the Perfect Origin Arc.

Dissatisfied with the independence of the Justice Chojin, The Man had the Perfect Origin (those that were still loyal to him) train other chojin to becoming the Perfect Large Numbers and the Perfect Chojin. Several began to gather under the leadership of Neptune King in the mortal realm, ultimately acting independently from Strong the Budo.

Neptune King declares that he is the true leader of the Perfect Chojin faction, but - in reality - he was just bluffing, since his troops were just a mere imitation of a true Perfect Chojin. This is later explained further in the sequel series: Kinnikuman (2011).

During the Perfect Origin Arc both the Perfect Large Number and the Perfect Origin were decimated: General Devil spared his former master's life, but he ordered him to resume his duties as Chojin Enma and return to the Chojin Graveyard (this time to oversee the dead souls of the fallen Chojin, and to never to resurrect them at his whim). The Man was not to interfere with the lives of the living chojin or to grant everlasting life to the Perfect Numbers.

By the time of Kinnikuman Nisei, Qilinman was the head of the Perfect Chōjin. It is still unknown whether in the Kinnikuman Nisei continuity that Chojin Enma - without his everlasting life - is still in the Chojin Graveyard or if Qilinman replaced him as the leader of the whole Perfect faction.

They follow many strict and hard rules, such as "Never use weapons", "Never show your back to an enemy", and "Defeat is absolutely inexcusable". If any of these rules are broken, they must commit suicide or proof that they still worthy to be part of the Perfect Chojin (by fighting another Perfect Chojin). This result in them been devoided of feelings, also giving them the notion to be the closet chojin to the gods.

Despite this hard rules, it looks like by Kinnikuman Nisei times, the faction has degenerated a lot, since now they team up with the rest of Evil Chojin, and don't have a lot of relevance in the actual story.

In their debut chapter in the Dream Chojin Tag Team Tournament, Kendaman and Screw Kid explained that Perfect Chojin possessed god-like strength that no one in this world could oppose, and so they exiled themselves to the heavens. There they sparred with each other for thousands of years, transcending emotions and gaining power that rivalled the gods.

Neptune King and his followers 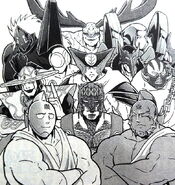