Scramble for the Throne Episode 3

Chapter 276
A chojin whose head and forearms are pliers.

Pinchman is the advance guard for Team Kinnikuman Big Body, where he fights against Mammothman. He starts out in the advantage against and uses his Pinch Claw, but is soon defeated by the Powerful Nose Breaker.

When Rampageman appeared at the Mausoleum of the First Qin Emperor, Pinchman, Golemman and Cannonballer have showed up to stop him. Sadly, they failed as Rampageman devastated them.

Pinchman appears as the advance guard for Team Kinnikuman Big Body, against Mammothman who is the advance guard for Team Kinnikuman Super Phoenix, in Aizuwakamtsu Castle. [1] He begins the match by using a Pinch Claw to attack the true face of Mammothman, beneath his fur, but it is revealed nothing can hurt his true face. Mammothman then incapacitates him with a Powerful Nose Breaker, as part of his counter-attack. [1]

Disappointed by how easily he defeated them, Rampageman notes that they may not need the Capillaria Rays to wipe out the Chojin race. 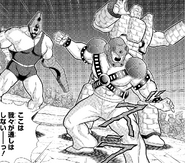 Retrieved from "https://kinnikuman.fandom.com/wiki/Pinchman?oldid=33425"
Community content is available under CC-BY-SA unless otherwise noted.