Chapter 166
Planetman (プラネットマン, Planetman) is a powerfull member of the elite team known as the Six Devil Knights.

Planetman is one of the Six Devil Knights who serve under General Devil. He is known as Uchū Jigoku (宇宙地獄,, Space Hell), and he uses space-themed wrestling. His body is made up of nine planets of the solar system. Originally appearing as a masked chojin, his true face is later revealed to be the legendary twelfth planet Vulcan.

Although his space wrestling is quite powerful, he is not above using cowardly and unfair tactics, such as his Face Planet technique (see below). Like the other Devil Knights, he possesses a Golden Mask (黄金のマスク,, Ōgon no Masuku) which Kinnikuman was supposed to fight him for.

After defeating Sneagator and being revived with Wolfman's life force, Kinnikuman heads for the Toshimaen amusement park to face his next opponent. Upon arrival, he and Meat find a ring and are then confronted by several planets. The planets then fuse together and become Planetman. He knocks Kinnikuman into the ring, which is then elevated several hundred feet into the air.

Planetman starts out in control of the fight, slicing Kinnikuman up with his Planet Ring. Kinnikuman tries to hide in a Ferris Wheel car, but Planetman is able to knock him out of there with his Ring Stone. He then freezes Kinnikuman's body with the Sub Zero Figure 4 Neck Lock and tries to shatter him with a knee drop, but Geronimo channels Wolfman's power and Kinnikuman is able to break free.

Planetman then reveals that his head is actually the legendary planet Vulcan. He also points out that Earth is nowhere on his body. That is because Kinnikuman represents Earth, and with that a map of the world appears on Kinnikuman's body. Planetman then begins striking the countries of specific Justice Chojins, causing their life-support bubbles to burst and their bodies to go through excruciating pain.

When he tries throwing his Apollo Dynamite at Japan, Kinnikuman catches the fireball and throws it back. Planetman then uses his horrible Face Planet technique, causing the faces of Terryman, Robin Mask, Warsman, Brocken Jr., Mayumi Kinniku, Sayuri Kinniku, Bibimba, and Canadianman to appear on the planets on his body. He also dons his Golden Mask so that Kinnikuman won't attack his head. Kinnikuman pays it no mind and tries a Knee Breaker, but realises that he would hurt Bibimba if he did. Kinnikuman finds himself unable to fight back until he realises that a Kinniku Buster wouldn't hurt any of them, just Planetman.

Unfortunately, Planetman transforms their surrounding into space, preventing Kinnikuman from completing the Kinniku Buster. Finally, Warsman insists that Kinnikuman punch through his face, which is directly over Planetman's heart. Kinnikuman reluctantly complies and pierces Planetman's heart, putting Warsman in a coma and freeing everyone from the Face Planet technique. Planetman then tries his Planet Ring one more time, but Kinnikuman gets behind him, causing the ring to decapitate Planetman. Kinnikuman then defeats him with Black Hole Suplex, throwing him through a hole in the middle of the ring. Unfortunately, Planetman's Golden Mask turns out to be a fake, just like Sneagator's.

Grim Reaper reappears at the Sagrada Familia in Spain. [2] It is revealed he never died, but simply disappeared after his fight with Buffaloman. [3] He explains that he was masquerading as an ordinary Perfect Chojin, when in reality he is one of the Perfect Origin, and his real name is Psychoman. He proceeds to summon a storm to destroy the Sagrada Familia, at which point Planetman appears as a challenger to Psychoman. [3] He amuses Psychoman by stating an intent to kill him. [4]

Buffaloman and Black Hole proceed to Barcelona to observe the match. It is revealed Planetman found Psychoman's location by luck alone, as he accidentally uncovered a portal when searching Psychoman's bedroom for his dumbbell in the Chojin Graveyard. Psychoman reveals the rule that a defeated Perfect Chojin must commit suicide does not apply to the Perfect Origin, at which point Planetman breaks usual wrestling rules to attack Psychoman with a knee-kick, despite the gong having not been rung. [4]

Planetman temporarily gains the upper-hand by chance, and proceeds to use a Planet Ring and continues with a Ring Stone, but Psychoman skilfully dodges. [5] Planetman tries again with a Ring Stone, despite its previous failure, but Psychoman successfully dodges again. Psychoman discards the ring with his superior strength, before using a Neck Hanging Tree, and Planetman breaks away with a Jupiter Ring, before managing to retrieve his Saturn Ring. He uses an Olympus Mons and Olypmus Volcano on Psychoman.

Psychoman lands safely on the corner-post, as the strength of the attack was inferior to his own overall strength, and counters with a far stronger Ignition Dress. Planetman then tries a Sub-Zero Planet-Four Headlock. [5] After attempting a Frozen Crush, Psychoman breaks free with a mere flick of his finger. [6] He slashes apart Planetman's body, despite most of his body being frozen, and completely breaks free from the ice, which was unable to hold his enormous power. This is followed by a Giant Reaching Palm.

He slams the weakened Planetman into the canvas, and Planetman desperately attempts a Space Hell, followed by a Devil-Move Grand-Cross, but - even using all his strength - he completely fails to leave an impact upon Psychoman, who easily uses a Magnet Power to block any damage. [6] Planetman struggles to stand, and - with no other options - uses his Devil Necromancy Soul Resonance Wave. [7] He somehow finds enough strength to use his Face Planet. [7]

This gathers the souls of the deceased Large Numbers in an attempt to hold sway over his opponent. This plan fails, as Psychoman - feeling no attachment to them - proceeds to destroy them one after the other, while severely injuring Planetman in the process. [7] He then finishes Planetman off with the Phantom Cannon, which completely destroys him. [8] The broken remnants of Planetman scatter to the canvas, as he proves himself too weak to prove a challenge against a Perfect Origin, and his head tumbles before Buffaloman and Black Hole, where it turns to dust and vanishes from sight. Psychoman is the clear victor. [8] 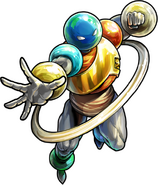 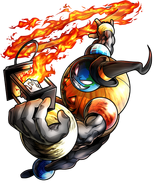 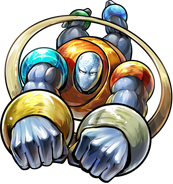 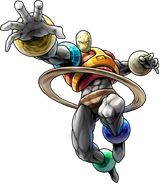 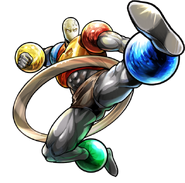 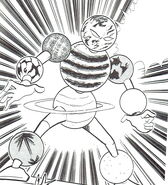