Polarman is a Perfect Chojin styled after a polar bear, and is a member of the Perfect Large Numbers.

Polarman works beneath Strong the Budo, as one of the Perfect Chojin, and - as part of a tournament against the Seigi Chojin - challenges Warsman to a match on the seventh step. He is ultimately killed by Nemesis. He is featured within the Perfect Origin Arc.

As with the rest of the Large Numbers, he is a loyal follower of the rules of the Perfect Chojin. He is a persistent and powerful adversary, but aside from that, little more is known about him.

As his name implide, he is a chojin-themed bear, more specifically a polar bear. He is a giant chojin that wears a polar bear outfit composed on a cape and a pair of gloves which he can use in some of his techniques, expanding the claws of it. Is unknown is he wears a mask, or if he has a polar bear head, since the rest of his body looks human. He wears a different kind of boot in each leg: one has a more regular appearance, and the other is modeled after a polar bear's leg.

Polarman was part of the Perfect Large Numbers, an elite team of Perfect Chojin send to attack the Earth under the command of Strong the Budo. he stays inactive during the first stage of the matches that were happening, and after having some loses, he enters the action.

On the seventh step, Warsman learns of Robin Mask's death in his match against Nemesis. [1] Polarman takes advantage of his distraction and attacks from behind, but Warsman counters with his Bear Claw attack. They exchange a series of blows, while Warsman incorporates Robin's techniques into his repertoire, and - when Warsman tries to throw him out of the ring - he uses his fur coat to parachute down to safety. Polarman then gets the upper-hand and kicks Warsman's head, causing it to dent and partially damage his brain. [1]

Polarman attempts to use a Polar Nail attack on Warsman, while Warsman is down, but Warsman evades the attack. [2] Warsman slowly works on attacking Polarman's weak-points, where he causes severe damage, but Polarman breaks Warsman's claws in the process. Warsman continues to attack Polarman's weak-points, and follows by biting at his leg, while his smile reveals that he plans to kill Polaman. He is knocked down again by Polarma. [2] Warsman is reinvigorated by Robin's spirit, and gets up a fourth time to attack Polarman. [3]

It is soon after that Polarman gets the upper-hand, but Warsman's friends support him and cheer him, increasing his Yuujo Power. [4] Polarman seemingly has Warsman defeated, as he lies atop of him and forces him into the mat, but Warsman rises with a Naked Tower Bridge. [5] Warsman traps him in a Palo Special. [6] Polarman snatches off Warsman's mask, but Warsman is no longer self-conscious, as he knows that he has the full support of his friends. Warsman finally defeats Polarman. [6] Polarman asks for Warsman to kill him, but Warsman refuses. [7]

Polarman is then killed by Nemesis, who then tosses his body into the sands below, where it is sucked away with Robin Mask's corpse. [7] 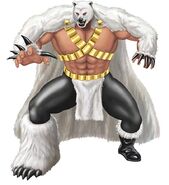