Scramble for the Throne Episode 24

Chapter 320
Prisman is a fictional character who appeared in the final story arc of Yudetamago's manga series Kinnikuman. He returns for the Kinnikuman (2011) series.

He came back to fight Bicorn, the God of Wrath. Despite an uphill struggle, Prisman defeated Bicorn. It is revealed that Prisman is no mere Chojin. In reality, he's a Capillaria piece given life by the God of Intelligence. To test his hypothesis of Geronimo being chosen, he fires a Rainbow Shower, which doesn't affect Geronimo at all. Before passing away, Prisman shoves his Capillaria piece right into Geronimo.

Prisman can channel the deadly Capillaria rays through his body to destroy Chojin with ease. This will not work on humans at all. Choshin are also exempt as well because they know how the Capillaria works. Brocken Jr. used this to his advantage by reverting back to his human state.

Scramble for the Throne Arc

A prism choujin who appeared as a member of Kinnikuman Super Phoenix's team during the survivor series to determine the next ruler of planet Kinniku. Prisman's trademark technique was the deadly Rainbow Shower, where he channeled sunlight through his body into a beam that could destroy any choujin's body. He first demonstrated this on Kinnikuman Zebra.

Prisman first saw action in the ring in a six-man tag team match that was himself, Super Phoenix and Mammothman against Kinnikuman Soldier, Buffaloman and Brocken Jr. Learning of Prisman's Rainbow Shower, Brocken stripped himself of his choujin power in order to use his body to shield Ataru from it. Shortly after, he, Phoenix, and Mammothman ganged up on Brocken, but Brocken regained his Choujin Body and shattered Prisman's head with a Bremen Sunset on one of the kinshachi statues on Nagoya Castle. Immediately after, Brocken fell to his death into the canyon below, motivating Ramenman to train fiercely for a showdown with Prisman in the finals in Osaka Castle.

The two of them met in a Jungle Big Gym Skyscraper Death Match (ジャングル・ビッグ・ジム摩天楼デスマッチ,, Janguru Biggu Jimu Matenrou Desumatchi), before which Prisman used his Rainbow Shower to destroy the ring attire of Ashuraman (who had sacrificed himself so that Team Kinnikuman could make it to the second match). Though Prisman hit Ramenman with the Rainbow Shower numerous times, he survived each hit and continued to fight back, using a few of his 102 Choujin Attacks. After Ramenman was able to return the Rainbow Shower it looked as though he'd win, Phoenix had Prisman stand on the middle section of black bars and pulled a lever, causing all but the black bars to fall to the ground. However, Ramenman used the last of his power to jump back up and shatter Prisman's body with the Kowloon Wall Drop, destroying him and avenging Brocken Jr.

Prisman makes a return at the Great Sphinx of Giza, challenging the Choushin with Terryman and Geronimo. His opponent is Bicorn, the God of Wrath. Bicorn delivers a lecture on the Great Sphinx of Giza and its true reason why its nose got shattered. Arrogant Chojin wanted to free themselves from the shackles of the Gods. Prisman tries a Rainbow Shower on Bicorn, but it bounces off because of his ozone layer-like protection. After using a failed Rainbow Shower against Bicorn, Prisman is carved up by Bicorn's Bicorn Horn Slicer and smashed into pieces by Bicorn's Wrathful Bicorn Drop. Both Terryman and Geronimo call out Prisman's name out of concern.

Surprisingly, Bicorn's finisher only breaks off Prisman's flab. Prisman takes advantage of this and kicks a bunch of Canvas Shuriken at Bicorn, who dodges all of that and slams down hard on Prisman's arm. Irritated, Bicorn states that Prisman's parlor tricks will not work. Prisman boasts that his body will not be destroyed that easily. Bicorn realizes that Prisman wanted Bicorn to break his body and tells Prisman that Prisman will realize his folly as a foolish Chojin. Bicorn wraps his horns around Prisman with a Blood Squeeze Horn.

Terryman orders Prisman to flee, but Prisman's 52,000,000 Chojin Kyodo isn't enough. As it turns out, Bicorn has a 99,990,000 Chojin Kyodo. In order to gain a physical form, all Choshin have to give up 10,000 Power, which is a mere pittance to them. No more Chojin could last long enough against a Choshin, anyways. Geronimo encourages Prisman, but Prisman is insulted and calls Geronimo a fake Chojin. Prisman follows Geronimo's advice and slips out, countering with a Red Rain of Berlin. Geronimo points that out, and Prisman notes that Brocken Jr. is also a "Chojin Cheat". However, those guys are not to be underestimated.

Bicorn, now full of wrath, orders Prisman to be silent and says that the Choshin are to wipe out the inferior Chojin race once and for all. Not one to mince words, Bicorn goes back to killing Prisman. Bicorn will discipline Prisman with an overwhelming show of force and stomp him into a million pieces. As he's stomped by Bicorn, Prisman retorts that it won't be that easy and counters with a Dragon Leg Screw grapple. Bicorn dodges and counters with a Flying Heel Kick. In a last ditch effort, Prisman fires off a Rainbow Shower, injuring Bicorn because he created a crack in Bicorn's Capillaria Ray protection. Prisman is surprised that worked at all.

Even if Prisman could affect Bicorn with the Rainbow Shower, Bicorn still has the upper hand. Bicorn unleashes a beatdown on Prisman, ending with a Bicorn Trigger Gimlet. Bicorn has finally stomped Prisman out once and for all. During his supposed victory speech, Bicorn gets interrupted by Prisman impaling him through his chest. Prisman boasts that the Gods aren't as invulnerable as they would claim. Bicorn throws Prisman aside and tells Prisman to never underestimate the Gods. Just as Bicorn is about to pull off another Tombstone Trigger Gimlet, Prisman catches him and reverses it with a Prism Spiegel Crash.

The Prism Spiegel Crash barely affected Bicorn, but Bicorn fell for Prisman's trick. The real reason for the finishing hold is so that Prisman could get behind Bicorn and unleash a point-blank Rainbow Shower at Bicorn's exposed backside. Upon losing, Bicorn has a breakdown both metaphorically and literally as Bicorn can't believe that he lost to a "third-rate fool of a Chojin". The Choushin must wipe out the Chojin as they're too dangerous to live. Bicorn crumbles away to dust, giving Prisman the victory.

Due to his injuries from the fight, Prisman is about to pass away. To test his theory, Prisman blasts Geronimo with his Rainbow Shower, but Geronimo is unaffected, which means that Geronimo can handle the Capillaria Rays. Prisman reveals his secret on why he could use the Capillaria Rays: he's a Chojin made from a Capillaria piece that originally belonged to the God of Intelligence. The Capillaria piece is essentially is his heart. Before dying, he yanks out his heart out and shoves it right into Geronimo's chest, fusing it with Geronimo's heart in the process. 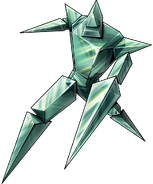