Kinnikuman Wiki
Register
Don't have an account?
Sign In
Advertisement
in: D.M.p, Characters from Brazil, Kinnikuman Nisei characters,
and 4 more

Ricardo was raised as a Justice Chojin. He later becomes conflicted, as he learned his heritage, and becomes an Evil Chojin. He does not make a reappearance after the Chojin Resurrection Arc.

Ricardo was born an Evil Chojin, but raised as a Justice Chojin by Pashango. He strives to act in the ways of justice, but one day accidentally kills his master: Pashango. He keeps this secret and dons a disguise, as he seeks to escape his misake, but his identity is revealed during the Chojin Olympics: The Resurrection Arc, and it is said that he cannot escape his evil nature. He loses his match to Mantaro Kinniku, and is never seen after this defeat.

Born an Evil Chojin, he was raised as a Justice Chojin. Ricardo was trained by a master Chojin submission artist by the name of Pashango in Brazil. Pashango, however, found out that Ricardo used to be a part of the d.M.p during a sparring session which led to Ricardo killing him with his Torture Slash and passing it off as an accident to his fellow students Hugo, Silva, and Hitode. Unbeknownst to Ricardo, Silva stuck around while the others sought medical attention for their fallen teacher only to see Ricardo stomp Pashango's corpse to be sure of his death. So Ricardo continued to live under the guise of the Submission Artist, with tights and a vest-like armour and a helmet with a tinted visor over the face.

Ricardo vs. The Skyscraper

Ricardo gained popularity in Brazil and eventually entered Brazil's preliminary tournament to be a Chojin Olympic representative. Ricardo's brutal style of fighting was not revered, as many other chojin fought in the same manner, which sheds quite a bit of light on just how nasty heroes can be towards one-another when it comes to glory. He defeats The Skyscraper in this form during the first round of the actual tournament. [1]

When his over-body eventually cracks open, his d.M.p roots are revealed and he turns into the Lord of Darkness, a jaguar/piranha chojin who gleefully ignores the concepts of rules and mercy. At the Chojin Olympics he is seconded by his friends Gazeman (ガンキュー Gankyū) and Pelé (ペレ).

He defeats Jade in the quarter-finals, and then proceeds to lose to Mantaro in a semi-final match that involves a large, wooden structure covered with razor-sharp blades ("Punishment X", manga) or a similar device that confers electric shocks ("Electrolix", anime). Ricardo's policy in battle is simply to win. He has no desire to align himself with either good or evil chojin. Along with that, he seems to find death-matches quite appealing, as he continued his attack on Jade even after the towel is thrown in. This don't lose, battle to the death, free agent kind of style seems to reflect properties from all three different factions of Evil Chojin.

Mantaro fights Ricardo; the latter of which is revealed to be innately evil, despite his attempts to be good, and is never seen again after his defeat. 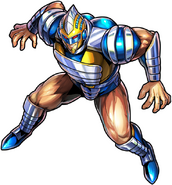 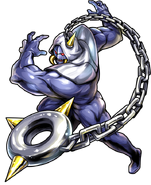