Scramble for the Throne Episode 12

Survivor Match for the Kinniku Throne Arc
Robin Knight (ロビンナイト) is the father of Robin Mask and grandfather of Kevin Mask.

Robin Knight is the son of Robin Grande and the father of Robin Mask. He is shown to be a strict and rigid father, but one with a prejudice against humans, as he wishes for his son to retain his Chojin status and not marry a human. There is very little seen of him, outside of flashbacks, but - due to Robin having other trainers early in the series, as opposed to other chojin often being trained by family - it can be inferred they have a strained relationship.

Robin Knight is introduced within a large manor house, filled with wrestling accolades, and is first seen striking Robin Mask after learning he wishes to become human. [1] We see his wife plead with him to leave Robin Mask alone, but he proceeds to violently strike Robin Mask over and over. [2] He is eventually pulled away by his wife, while he reiterates that he knows Robin Mask will make the right choice.

Robin Mask states that - although he's always obeyed Robin Knight - he intends to defy him and become human for Alisa Mackintosh. Robin Knight prepares to strike him again, but Robin Grande intervenes and forces a truce between father and son. He is very rarely seen after this point, but can be seen telling Alisa that Robin Mask has been missing for three days and appears in a bad temperament. [3] He is finally seen witnessing the match between Robin Mask and Guillotine King. [4] He watches the match from the sidelines, surprised to see his father cheering on Robin Mask. 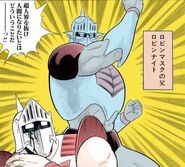 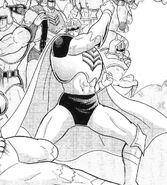 Retrieved from "https://kinnikuman.fandom.com/wiki/Robin_Knight?oldid=34607"
Community content is available under CC-BY-SA unless otherwise noted.