Satan is an evil entity that acts as the lord of all Devil Chojin. He appears at several points during all three main series, and often as a disembodied cloud of smoke with the silhouette of a face. He has enough strength to directly influence many chojin, including gods like Goldman, whom he was able to gift a new body. In the recent 2011 sequel series, he is given a corporeal form and is a main villain.

Satan prefers to hide behind the scenes and manipulate pawns to do his bidding. If he were to get into direct conflict with a strong opponent, he would lose pretty easily. He loves to punish those who failed him.

As an incomplete deity, Satan covets the chance to become a god. He will stoop to anything to achieve those ends.

Satan has manipulated Buffaloman, General Devil and Omegaman Aristera to do his bidding. As a result, he is indirectly responsible for the events of the Seven Devil Chojin arc, the Six Devil Knights arc, and the Six Spears of Omega Centauri arc.

Satan makes his first appearance as the man behindBuffaloman's actions during the Seven Devil Chojin arc, being the one who made the deal with him to give him his signature 10,000,000 Chojin Power. When Buffaloman loses to Kinnikuman, Satan punishes him by impaling him with a black spike.

After the defeat of The Man by General Devil, Satan decides to take matters into his hands because he feels that General Devil is not a true Devil Chojin. His first actions were to seal away the three factions in their headquarters and send out the Omega Centauri's Six Spears.

According to Omegaman Aristera, Satan is just a mere informant and says that the Six Spears don't serve anyone. However, Kinnikuman Super Phoenix and Ataru Kinniku claim that Satan's using the Six Spears as pawns in his plan, which is revealed to Aristera personally by Satan himself. First, Aristera activates his Fire of Inner Strength and then Satan possesses him when he's about to kill The Man, letting Satan take over The Man's position. When Aristera and Mariquitaman lose to the combined forces of the Full Metal Jackets, Satan tries to kill him for going too soft on him. Mariquitaman gets in the way at the last second, though.

Satan reveals that he could create a physical body of his own in order to get rid of the obstacles in his path. With his new body, Satan easily dispatches Brocken Jr., Ataru and Aristera because the three Chojin are still worn down from their earlier tag-team match. Luckily, Justiceman steps in at the last second, challenging Satan to a one-on-one match/ Satan tries attacking again, but Justiceman stops him with an armlock.

In response, Satan throws him aside, slamming Justiceman against the turnbuckle. As Ataru escapes the floating ring with Mariquitaman and Aristera, he yells Justiceman's name. Luckily, Justiceman calmly gets up.

Satan thinks that Justiceman's got a swollen ego for saying that he'll fight Satan in the name of justice. Satan admits that he would have some trouble fighting against The Man, but fighting against a lackey of his will be a piece of cake. Satan will shatter Justiceman's misguided confidence into pieces with his new body. Justiceman will be the first offering to him.

Justiceman asks Satan why he would grow a new body. Justiceman notes that Satan always seeks out new hosts because he's so paranoid. Creating a new body is not like Satan at all. To Justiceman, Satan's already revealed his hand. Justiceman theorizes that this contradiction is connected to the recent chaos going on lately.

Satan orders Justiceman to be silent. Justiceman retorts that Satan might be upset after getting elbowed in the face. Justiceman corrects him and properly introduces himself as the Perfect Sixth of the Perfect Origin. Justiceman has lived for countless aeons and he will beat threats like Satan through the teachings of The Man. After all, Justiceman's here to protect the Chojin world's promising future!

With that, Justiceman grabs Satan by the arm and throws him, but Satan reverses that and knees Justiceman in the gut. Satan thinks that there's no hope for the Chojin world. The only thing that exists is dark despair. The more despair exists in this world, the stronger Satan becomes. Satan slams Justiceman's head into the mat and elbows him in the neck.

Satan thinks that Justiceman's pathetic and that he'll never protect the Chojin world in a state like this. It shouldn't be a problem for Satan to change things for the worse. Satan grabs Justiceman's legs and slams his face into the turnbuckle. Satan's not done yet, though. There's more pain on the way.

As Satan delivers a beatdown on Justiceman, Satan announces that he will destroy Justiceman until his pride and face are completely gone. Seeing as the match has barely lasted for five minutes, Satan decides to check on Justiceman's barely damaged mug. Clearly upset, Satan proclaims that he cannot stand Justiceman's kind at all. Justiceman makes Satan bubble with rage. Justiceman can keep up the act all he wants, but Satan's through with playing around. It's time for one of Satan's finishers, the Satanic Soul Branding! Anyone who stands in Satan's way will get a one way trip into oblivion!

And thus, Satan does that move on Justiceman, but Justiceman doesn't flinch at all. He asks Satan if that was his strongest move. Justiceman breaks free, coughing up blood when he's finished. Satan boasts that the Satanic Soul Branding had an effect on Justiceman after all. Justiceman praises Satan for hurting him enough to the point where he coughs up blood. This is far as Satan will go in Justiceman's eyes.

Satan repeats that he can't stand Justiceman's attitude while unleashing another beatdown on Justiceman. He doesn't like that Justiceman acts like he's invincible. Satan will reveal Justiceman's act is all faked. To do that, he'll use Justiceman's own scales. Satan's belt buckle weighs less than Justiceman's item, making Satan think that he's right about Justiceman being all talk.

Satan notes the irony of Justiceman's scales turning against him and exposed Justiceman's own fear of Satan. That earlier act was all a bluff. Satan goes for a kick, but Justiceman catches it and easily reverses it with a tug. Satan thinks that Justiceman's resistance is annoying.

However, Justiceman announces that he's stopped playing around. He will use his Justice moves for this fight, performing the Justice Crash on Satan to prove his point. A crack forms on Satan's body, causing him to yell that his defeat can't be happening! Justiceman explains Satan's plan of possessing a powerful vessel in order to defeat The Man. When Satan's plan failed, he decided to create his own body. Justiceman believes that Satan's in a rush to do something and realizes what that is.

Satan retorts and orders Justiceman to stop his theorizing. Justiceman ignores that and does a Judgement Twist. Justiceman asks if Satan can feel the impermanence of Earth. Satan's body can deal with normal Chojin, but it can't deal with a Perfect Origin. Giving up on a physical body for so long has made Satan weak. If Satan is struggling to beat Justiceman in combat, he has no chance at beating The Man. When his plan to possess Aristera failed, everything began to unravel for Satan.

There's a reason for Satan not giving up and adapting a physical body, according to Justiceman. Satan calls Justiceman an insolent brat and asks if he could dare to critique Satan, the great Demon King like that. Justiceman retorts with a pair of his own questions, saying that Satan's title doesn't even matter at all to him. Satan's time has passed. The Perfect Origin's time has passed as well, which is why Justiceman and The Man stopped interfering. Justiceman adds that an unneeded relic like Satan needs to stop interfering with Chojin lives, placing him in the Justice Avalanche finishing hold to accentuate his point.

A crack appears on Satan's arm. Ominously, Satan warns Justiceman that he still has a plan even if he's outmatched by Justiceman. Justiceman asks about the plan, which is revealed to be Satan's ace up his sleeve. It is the one thing Justiceman isn't prepared for. Justiceman says that Satan has nothing at all and slams him into the canvas.

Satan recovers with an upward kick to Justiceman's face and boasts of his own power. Justiceman shouldn't underestimate Satan since Satan's the Demon King and all. Justiceman goes for a kick, slamming Satan into a ring turnbuckle. Satan doesn't like that Justiceman's messing around with him and admits that Justiceman hasn't beaten him, not by a long shot. Satan can't lose at all. With this, Satan attempts to possess Justiceman's body.

Today is the birth of a new demon king, and the start of a bloody Sabbath! Justiceman manages to prevent Satan's possession and rejects Satan. While kicking Satan in the face, Justiceman asks, "What on Earth are you thinking?" Satan obviously didn't think things through.

Satan's plan is clearly half-baked because Justiceman doesn't have the needed evil heart that Satan desires at all. This is the reason Satan gave up on possessing Aristera, since Aristera made an attempt to reform. Satan brings up the scales tipping in his favor, but the scales suddenly tip in Justiceman's favor. Satan has a nervous breakdown upon seeing that.

Justiceman explains that his earlier guilt came about because he let Satan roam around on Earth. That guilt has faded away since Justiceman can now enact his most prized finisher on Satan, the Justice Penalty, without impunity. And thus, Justiceman has deemed Satan guilty! Justiceman leaps into the air and performs his finisher move, marking Satan guilty for his many crimes!

His face still gripped by Justiceman's hand, Satan can't believe he's being wiped out with no mercy. With this finisher, Justiceman causes Satan's entire body to shatter completely. With his plans ruined, Satan's spirit threatens to haunt the world again since there's always evil in everyone's hearts. When Satan returns, he'll back to weave another plan that will destroy those meddling Chojin. With that, Satan disappears.

During the meeting with The Man, The Man reveals that Satan's an incomplete being that desired to become a God. His plan was to steal The Man's piece of the Capillaria Ray crystal and gain divine power. To do this, he manipulated the Six Spears of Omega Centauri to do his bidding.

He shows his true body 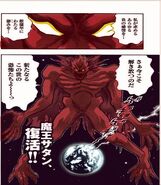