Sayuri Kinniku (キン肉小百合,, Kinniku Sayuri) is a character from Yudetamago's manga and anime series Kinnikuman. She was voiced by Nana Yamaguchi (Yoko Matsuoka in Kinnikuman: Scramble for the Throne).

Sayuri is the mother of Kinnikuman, wife of Mayumi Kinniku, and the 57th Queen of Planet Kinniku. She has the characters ママ (Mama, ママ) written on her forehead. She is usually depicted as a typical long-suffering, loving mother character, but she has been known to transform into a violent fan during her sons matches, even to the point of using her husband to show Kinnikuman which moves to use. She has the ability to grow large liker her son, as evident from the time she masqueraded as him in order to fight kaiju and redeem his image.

In the manga and first anime she is typically referred to as Mama, but in the Throne Arc anime she is called by her real name. In both anime, she was listed in the credits as Queen Kinniku (キン肉王妃,, Kinniku-Ouhi).

By the sequel, Kinnikuman Nisei, she has died, leaving Mayumi a widower. Her name comes from Sayuri Yoshinaga.

Sayuri is first seen in a flashback seen, where she and Mayumi Kinniku were taking a vacation to Earth. [3] When a pig sneaks its way onto the ship, they accidentally throw their son - Suguru Kinniku - out of the ship and onto Earth. [3] Sayuri greets Kinnikuman when he returns to Planet Kinniku; she begs Kinnikuman to retrieve Mayumi's championship belt from King Ton, but eventually begs Meat Alexandria to take Kinnikuman back to Earth and states they have adopted Shigeru. [4]

When Kinnikuman neglects his duties and refuses to fight Kaiju, Sayuri dons the disguise of Kinnikuman and fights kaiju in his place. [5] Later, Kinnikuman is summoned to Planet Kinniku and required to rescue some hostages, and - when he refuses - Sayuri pokes him in the eye with some chopsticks. [6]

Sayuri attends Kinnikuman's coronation with Mayumi. [7] The God of Intelligence tells Sayuri - as he disrupts the coronation - that a great fire took place at the hospital where Suguru was born, and that five other children were born at the same time, so any of those could be her true child. [7] To determine which of the five must be prince, a tournament is decided, and Sayuri is to decide the order of the fights. [8] After the six men - including Kinnikuman - throw their swords onto a white flag, she cuts her arm and spills her blood onto the flag, and this creates a map of Japan, with each of the swords marking a location. Each man's sword determines where he shall fight, and Sayuri faints with the blood loss. [8]

During the tournament, Sayuri speaks of Ataru Kinniku. [9] It is revealed the two had a son before Suguru, who ran away from home, and the two vow not to speak of him again. [9] They begin to suspect that Kinnikuman Soldier is Ataru in disguise (their son who ran away while she was pregnant with Suguru, and that he rebelled against their strict training and teaching and resented not being able to lead a normal life), at which point Sayuri knocks over the Prophecy Book, where another prophetic prediction is revealed. [10]

They manage to deduce that Kinnikuman Soldier is Ataru, who is willing to sacrifice himself to help his little brother: Suguru. [11] A black hawk then descends to steal a page of the book that Mayumi is holding in his hands. [12] This leads to Ataru being slowly wiped from existence. [13] A photograph of Ataru shows that Ataru is starting to disappear, due to the page that was stolen being his page and now the page is being burned by Team Phoenix. Mayumi tries to leave to save Ataru, but is stopped by the guards that demand he remain impartial. [14] Together, Sayuri and Mayumi grieve his death. [15]

Later, during the match between Suguru and Phoenixman, Mayumi uncovers a prophecy that the fake prince will have a heart defect, and both princes begin to cough blood in the ring. [16] They realise that they can determine who is the real prince by an x-ray, instead of a deadly battle to possible death. They are forbidden from leaving, as they must be impartial, but Bibimba rescues them and together they race to Suguru. [17]

Later, Sayuri is kidnapped and held hostage with Mayumi by Mammothman. [18] They are then tied to the chairs and unable to intervene further in the matches. [19] Sayuri is eventually freed and is present for Suguru's victory against Phoenixman, and she can be seen celebrating with others. [20] 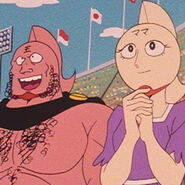 Sayuri in the anime