Silverman is the brother of Chojin God Goldman, and ancestor of all members of the Kinniku Clan. Silverman's spirit has possessed the Silver Mask since his death.

Silverman is one of the chojin gods, as well as a brother of Goldman. He was granted permission by The Man to lead a group of chojin, which would later be known as the Justice Chojin, but eventually he was manipulated into a fight against Goldman by Justiceman. He and Goldman decapitated one another, both becoming the Silver Mask and Golden Mask respectively, which were kept safe on Planet Kinniku.

Silverman is a kind, compassionate person. Because of this, he founded the Justice Chojin. In combat, it's a different story. He's completely brutal towards his opponent, to the point of destroying them outright.

Silverman is brothers with Goldman, the God of War. Despite this, they would quarrel with each other and would end up killing each other in combat. Goldman's feud with Silverman would later be reignited during the Golden Mask arc.

While still possessing a flesh and blood body, he was granted permission by The Man, the leader of the Perfect Chojin, to train a new generation of Chojin, not personally chosen by The Man, but willing to learn and understand Silverman's ideal of Justice and Mercy, thus creating the Kinniku Clan and the Justice Chojin. While The Man believed the Justice Chojin would always be submissive to Silverman, and thus servants to the Perfect Chojin, Silverman wished for them to grow and learn.

However his dream almost didn't pass to fruition, as he still quarrelled with his own brother Goldman and the two eventually engaged in a sword battle, a battle which ended with the two of them simultaneously beheading each other. His soul was placed inside the Silver Mask, and kept on Planet Kinniku as a good omen. Before the fight he was able to carve a fresco with the incomplete form of the Muscle Spark, thus ensuring the continuation of the Kinniku Clan without his guide, hoping one of his successors would eventually be able to rework his former winning move, the Arrogant Spark, into the complete Muscle Spark. Only a few talented members of the clan, like Nemesis and Kinnikuman managed to achieve the feat, with only Kinnikuman understanding the spirit of the true form of the Muscle Spark.

Many years later Goldman aligned himself with Satan and became General Devil: Kinnikuman himself had to stop him, and for a while the Silver Mask was used as a mean to contain the Golden Mask keeping Goldman's soul, creating a fused mask.

The fusion was broken during the Perfect Origin Arc, when both brothers returned to confront Strong the Budo, secretly The Man himself. While Goldman concentrated his efforts in battling Strong the Budo, Silverman used his allotted time before returning to the Silver Mask to fight Psychoman.

Silverman first appears in a flash of light in the skies. [1]

Silverman asks that Psychoman leave Brocken Jr. to him, as opposed to killing him, due to the Justice Chojin falling under his domain. [2] Psychoman proceeds to knock out Brocken Jr., after which Silverman apologises to Psychoman for the damage caused by Goldman, and takes Brocken Jr. back to his friends below. It is revealed that the reason for the Fire of Inner Strength is that it is inherited by Silverman's genetics. [2] Silverman returns Brocken Jr. to Kinnikuman, before conversing with him. [3]

He confides that he left the Chojin Graveyard on Psychoman and The Man's behest, so that he could persuade his brother to return, but that he disagreed with his brother's approach and raised the Justice Chojin to be free, and now they finally have strength to defeat the Perfect Chojin. Silverman refused to return to Psychoman and The Man, as he believes that his purpose is on the surface world, and believes in the potential of the Justice Chojin to flourish and rule, as opposed to being eradicated. [3]

Goldman and Justiceman agree with Silverman, that all chojin should be allowed to live. [4] Psychoman declares he will fight Silverman, to see whose ideals are best, and a formal match it declared. It is revealed that Silverman and Psychoman have a 50/50 win-loss record, and this will be a deciding match between them, as Silverman jumps into the ring. [4] Psychoman begins with a series of punches, but Silverman blocks every blow with his shield. [5] Silverman manages to deliver a blow and throw Silverman.

The two engages in a series of blows, but Psychoman recognises that grappling is Silverman's strength and delivers direct strikes with his Spear Dress. Silverman deflects all but one blow. Psychoman knocks him to his knees, before gaining the upper-hand and flings him with a double-arm suplex. [5] Silverman grinds on the ropes with his shield, before using the pressure to push out and bash Psychoman with his shield, and this prompts Psychoman to attempt a Mongolian Chop, which is stopped by a Perfect Defender. [6]

The Perfect Defender is revealed to be the originator of the Muscle Curtain.

Psychoman attempts a series of blows, but each one is countered by the Perfect Defender. Silverman then delvers a punch, but the opening allows Psychoman to use a Face Claw, and Silverman relentless kicks at Psychoman, who refuses to let go of him. [6] This leads Psychoman to grab Silverman from behind, while keeping a hold of his face, until Silverman uses a judo throw to dislodge him. [7] Psychoman uses a Face Claw again, while Silverman retaliates with an Arm Bar, and - after receiving an onslaught of blows from Silverman - Psychoman manages to throw Silverman from him and uses his Magnet Power.

This removes Silverman's mouth guard, and Psychoman gains the upper-hand before he opens the Apollo Window. [8] This turns the ring into a giant magnet. [9] After a series of blows against Silverman, Psychoman uses his Grim Reincarnation technique. [9] Silverman survives the attack. [10] He states that he considers Psychoman to be his best friend, and asks him to forgo his magnet power, but Psychoman retaliates with an attack that forces Silverman to use his Perfect Defender. Psychoman attempts a Thunder Sabre Squall. [10]

Psychoman follows with a Longer Thunder Arrow. [11] Silverman manages to demagnetise himself, resulting in overcoming Psychoman's attacks, and Silverman gains the upper-hand, as he reveals Psychoman has relied too much on his magnet power (neglecting basic moves and techniques). [11] Silverman proceeds to use an Arrogant Spark. [12] The match is declared over in Silverman's favour.

Silverman speaks freely with Kinnikuman (and Nemesis) about the secret history of the Kinniku Clan, and how he abandoned the Arrogant Spark - (made to ruin and destroy every foe) - because it lacked the mercy that the Kinniku Clan shows towards with the defeated opponents, turning them into allies and friends. This move would later become the Muscle Spark, which Silverman etched onto the Kinniku Temple mural himself. [12] He states his faith in Kinnikuman, while warning Nemesis to learn the art of mercy. [13]

Silverman states he only used his Arrogant Spark this time, due to his knowledge that Psychoman would survive the attack, and takes Psychoman's dumbbell from him, as he reveals that he wishes all ten dumbbells of the Perfect Origin to be collected, so that they may die together (as all ten assembled would eradicate the Perfect Chojin). [13] Silverman proceeds to as Terryman for his dumbbell, obtained from Justiceman, as he seeks for him and the Perfect Origin to be unburdened of immortal life. [14] Silverman takes the dumbbell, and offers both to Goldman. [14] The collected dumbbells do not destroy the Perfect Origin, however. [15]

Psychoman reveals that he altered the dumbbells, so that - once collected - only he would be killed by them, and this would allow the others to live. [15] He confesses he could not undo the magic, so he redirected it onto one person instead of all ten, and - while he considered erasing Ganman at first - he had not the heart. [16] Silverman collects Psychoman into his arms, while The Man chastises Psychoman, before thanking him for his loyalty. Psychoman thanks both Silverman and The Man, before dying in Silverman's arms.

He leaves behind only a hat, while Silverman starts to disintegrate. Silverman reveals that he and Goldman only had enough power to generate one body, with Goldman having that body, and so he only came back for one battle against Psychoman, meaning he now must leave their world. He vanishes while clutching Psychoman's hat, before finally only his smiling mask remains. The hat and mask rest together. [16]

Despite returning only briefly to life, he had a long lasting effect on the events around him: because of his confession, Kinnikuman was able to understand even more completely the ideals of the Kinniku Clan, while Nemesis lost his battle with Kinnikuman by trying to replicate the body intensive Arrogant Spark. 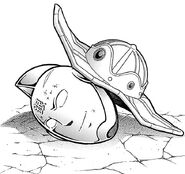 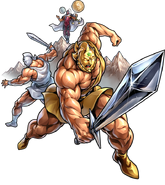 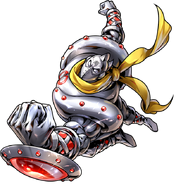 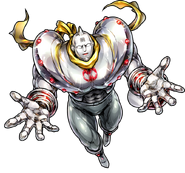 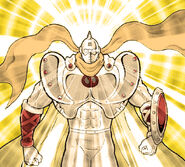