Kinnikuman Wiki
Register
Don't have an account?
Sign In
Advertisement
in: Characters from America, WSF, Justice Chojin,
and 4 more
English

Skull Bozu is a brutal fighter within the WSF. He acts as Sheik righ-hand man and bodyguard.

Skull Bose was a big deal fighter in the Chojin League. He has SUKARU (skull as it is pronounced in Japanese) written all over his body. He is very brutal, ripping off Beauty Rhodes' bottom lip at one point and regularly using weapons. He also attacks opponents with body attacks while sprouting the porcupine needles in his body. However, he leaves his head bare and spike-free, a weak-point Kinnikuman exploited. He was last seen in the Chojin Olympics Big Fight preliminaries, now sporting a toupee.

As Kinnikuman tries to leave for St Louis, Skull Bozu breaks through the wall of the building to access him. [1] He declares that victory belongs to the World Supermen Federation, while his companions warn Kinnikuman to quit his quest to unify the American chojin world, and Kinnikuman - after knocking out one of his companions - walks away from him without humouring him or conceding to him. [1] He later appears on a glass screen, alongside the World Superhuman Council, to declare that the two groups have joined forces. [2]

When the two groups break up again, it is Skull Bozu that suspects Kinnikuman is working as an insider and spy to sabotage their progress. [3] He is due to fight King Crusher, but Beauty Rhodes kills King Crusher and the WSF declares war on the WSC. [4] When Skull Bozu questions Kinnikuman, Kinnikuman is able to trick him with a false story and a claim that he idolises Skull Bozu, who then welcomes him to the WSF. He asks Kinnikuman to desecrate a picture of Mayumi Kinniku as proof, which he obeys and convinces Skull Bozu further he can be trusted. [4]

Skull Bozu prevents the other chojin from removing Kinnikuman's disguise, even going as far as to rip off Beauty Rhodes upper lip and leave him lying in a pool of blood. Skull Bozu later reveals to Sheik that he knows Kinnikuman is lying, but can use this to get closer to him. [4] Skull Bozu leads Kinnikuman into a grand hall, where he uncovers more clues as to Kinnikuman's true identity, by confronting him with their group's evil ways. [5]

Later, Skull Bozu announces a fight between Robin Mask and Dynamite Piper. [6] He aids in helping capture Kinnikuman, and traps him in their dungeons. [7] After this, he hires Kinkotsuman and Iwao to sabotage the upcoming match between Kinnikuman and Robin Mask in three days time, which Skull Bozu forces both to participate. [8]

Towards the end of the match, he orders Iwao to crash a plane into the ring and destroy Kinnikuman. [9] Due to both Robin Mask and Kinnikuman seemingly dying, Skull Bozu announces himself the winner and the champion, and thus the WSF as the champions of the three-way war between the various chojin associations. [10] When they're both revealed to be alive, Skull Bozu sets off a bomb to blow up the entire ring with them still there. [10] When Skull and the WSF chojin try to escape, the WSC attack them, and Beauty Rhodes attacks Skull personally until Skull is in danger. [11]

In Las Vegas, beneath the World Supermen Federation headquarters, Skull Bozu announces that Devil Magician - as the sole survivor of his hellish training - shall become his tag partner. [12] Their first unofficial match of the tournament is during the opening ceremony, as they engage in a battle royale. [13] They enter in black robes to "Night on Bald Mountain", as Sheik Seijin tells them to kill their opponents and Skull Bozu attacks Jean Steamboard. [13]

Blood Illusions vs. The Emperors

After taking a helicopter to their next match, they train for their next match in the Century Plaza. [15] They enter their next match to the "Funeral March", as they compete against The Emperors, and Devil Magician appears uncertain, as Skull Bozu reminds him not to be weak. [16] Skull Bozu throws Devil Magician a bottle, which he uses to smash Beauty Rhodes on the head, so that he can break free from their holds. It is revealed the contents were gasoline, and Skull Bozu breathes fire over him, as Devil Magician throws a dagger at Jean Steamboard. Edith Harrison declares they surrender. [16] After attacking Terryman and Meat Alexandria, they leave the ring covered in blood and the four other men brutally injured. [16]

Blood Illusions vs. The Machineguns

The final match of the Blood Illusions, is against The Machineguns. [17] Skull Bozu attacks using his Hedgehog Move, where his body - except his head - erupts into spikes. Kinnikuman manages to defend, and stabs Skull Bozu's head with his own spikes. Kinnikuman then uses a Drop Kick on Skull Bozu, while Terryman uses the Brain Buster on Devil Magician. They follow with a series of other wrestler's signature moves. [17] Terryman - distracted by the abuse of a child - is showered in a flurry of punches by Skull Bozu. [18] Skull Bozu proceeds to throw him out of the ring, but - on retrieving his leg - Terryman uses a Calf Branding against Skull Bozu, which results in a knock-out and thus secures their victory. [18]

Know wearing a toupee, Skull Bozu participates in the 21st Chojin Olympic alongside the other Justice Chojin, but he gets eliminated at the start of the preliminaries.

At the final showdown between Kinnikuman and General Devil, Skull Bozu, and the rest of the Chojins that were inside the life support bubbles, were transported under the ring, but he couldn't bear the weight of ring.

He hears Neptuneman's message and travels with other Justice Chojin to Osaka Castle to support Kinnikuman during his fight final with Super Phoenix. 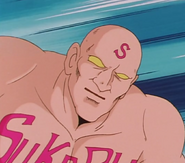 Skull Bozu in the anime