At a young age he witnessed his father, Somenman, murdered by the infamous Cobra Gang. When he attempted to avenge him he was knocked down over the side of a cliff. Fortunately, he fell into the river and was saved by Chen Zongming, who took him under his wing and trained him in the ways of Chojin Kung Fu for twelve years, so that he could one day avenge his family.

During his graduation exercise, Chen had him lift up a scalding hot large jar, and because his forehead was pressed against the jar the Zhong (中) mark was branded onto his forehead. Afterwards, Chen rechristens him Victory Ramenman and awards him with the Toryu Gokui Sho. After he defeats the Cobra Gang, he sets off on a journey with Shumai, a young boy whose village was also attacked by the Cobra Gang.

In addition to Chojin Kenpo, Ramenman is shown to also know Praying Mantis Fist (螳螂拳, Tōrōken), Drunken Fist (酔拳, Suiken), and Eagle Claw (鷹拳, Takaken). He rarely ever loses a fight, and whenever he does it is only during his first encounter with the enemy that he'll lose (ex: The Seven Evil Shogi Pieces, Jinlong, Anki Go Tensei, etc).

His most frequently used technique is the Mōko Hyappo Ken, which is usually the deciding technique in his fights. However, stronger opponents like Bailong and Tiaolong have been able to defeat it. His favourite weapon to use is the sansetsukon.

The Ramenman in this series has no direct connection to the Ramenman in Kinnikuman. This is partially supported by a line in Episode 8 (Deep of Muscle), in which a character references the Tatakae!! Ramenman series, implying this series in a fiction series existent within the main franchise. It is likely this series is an alternate continuity, at best, in a similar vein to Kinnikuman Nisei ~All Out Assault~, although some theorise that Victory! Ramenman is an ancestor of Ramenman.

His real name is Ramenman (ラーメンマン), and this is usually how his name is written when characters speak to him. When he becomes angry, he tends to shout Yu...ru...sen!! (ゆ…る…せん!!, Un...for...giveable!!) and tears up his upper clothes, similar to Kenshiro from Fist of the North Star. 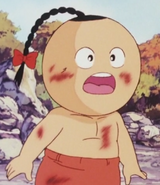 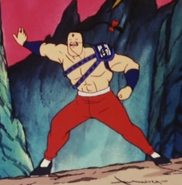