Voltman (ボルトマン) is a villain in Kinnikuman Nisei that is made of electricity.

Voltman (ボルトマン) is a living microwave oven; he has a plutonium battery in his body, and he is able to attack his opponent with electricity. He can alter his already large size and has tremendous power. When he pulls out one of his trademark dreadlocks, they swell up and transform into various electronic appliances. He states that unless he regularly imbibes Justice Chojin blood, he can become very ill, but this was likely said in jest. He holds hostage Meat Alexandria's right leg.

He first teams up with Ashuraman as The Demolitions and defeats the B-Evolutions tag team, which consists of Kevin Mask and Scarface. In a return match, they face The Young Masters: Mantaro Kinniku and Kevin Mask. After Voltman is defeated by their NIKU⇒LAP tag technique, Ashuraman sends him plummeting from the ring to his death. As his general stone is removed, he shrivels up into a mummy.

The Demon Seed reveal there are General Palasts across Japan, and - after using tentacles to kidnap the Army of Idols - take their individual opponents to their specific Palasts. [1] The General Palast breaks into five pieces, with each Death-Match Room going to the new locations. [2] Voltman first appears on the Ganryu Islands, Yamaguchi. [3] The final palast is a ring with a rib-cage that encases the exterior, which forms to become General Rib. [4]

He announces that the next match will be a tag-match between himself and Asuraman (The Demolitions), and Mars and Kevin Mask (B-Evolutions). [4] Voltman makes the last two parts of Alexandria Meat's body levitate above two corner posts, namely his left leg and his head. [5] Voltman engages in a series of blows alone, while Asuraman regenerates outside the ring, and bides time until he is fully regenerated. [6] The combined tag team leads Voltman to gain an advantage, culminating in his Tesla Coil attack. [7][8]

Voltman manages to incapacitate Kevin, leading Mars to fight primarily alone for the duration of the match. [9] He proceeds to use the Megahertz Tempest. [9] He fights mostly one-on-one with Mars, who attacks several times with his Swallow Tail, and at this point Voltman reveals he is powered by plutonium and thus has infinite energy. [10] Mars uses a moment of distraction to make himself immune to the electric attacks, by covering himself in rubber from the ring. [11] Asuraman takes the lead in the fight, until Mars is incapacitated by him. [12][13]

Voltman activates the plutonium core inside his body. [14] He engages Fatal Square, which opens a microwave compartment on his chest, and reveals the microwaves he releases are ten-thousands times stronger than the common appliance. Mars is cooked alive and vaporised inside him. [14] He jumps into the air to release Meat's body parts, and claims his leg in the aftermath. [15] Voltman and Asuraman proceed to flee to the last palast, where they await their final match against Kevin Mask and Mantaro Kinniku. [15]

The last palast emerges at the Osore Mountain at the Shimokita Peninsula, and they reveal it is the place of the Demon Womb, where they seek to resurrect General Terror. [17] They attach Meat's body parts to General Terror's statue, and reveal if Mantaro and Kevin are late that Meat will be absorbed into General Terror. [17] At the appointed time, they mock Kevin and Mantaro for being late, but both arrive just three minutes before the deadline. [18] Voltman mocks them, as they are forced to climb the bodies of their friends in order to reach the ring, and tells them that there are only 55 minutes left to save Meat. [19]

Voltman works in tandem with Asuraman to attack Mantaro. [20] He goes on to used a Demolition German Suplex on Mantaro, but Kevin Mask sacrifices himself to save Mantaro by throwing himself in the way of the blow. [21] Mantaro tags in Kevin Mask, while Asuraman tags in Voltman. [22] Voltman begins with an advantage, as Kevin loses him calm demeanour, but some advice from Mantaro allows Kevin to regain his composure against Voltman. They engage in a series of blows, as Kevin finally takes the lead, and Voltman resorts to his Tesla Coil, but Mantaro saves Kevin with an attack. [22]

Kevin soon struggles to win, as he tries to fight alone, while Voltman works in a team with Asuraman. [23] Voltman tries to microwaves Kevin, as he did with Mars, but Kevin allows him to do this with the knowledge that his armour is made of steel. [23] Even though the steel could destroy Voltman, he reuses to tag in Asuraman and decides to fight alone. [24] Voltman uses the Full Power Electric Coil to surprise Kevin, who did not train for such an unexpected surge of power. It melts the steel armour around his body. [24]

The Fatale Square is employed again, which Voltman uses to melt Kevin's mask and boil his skin. [25] Kevin realises that Voltman's Tesla Coil is in the pond water, next to Sunshine, who is made of gold; Kevin uses this to gold-plate his body. [25] Kevin not only defeats the microwave, but drills a hole through Voltman's chest. [26] Even as Voltman's body begins to melt, but he still finds strength to fight back. Voltman - in desperation - rips off his remaining Tesla Coil and uses it to hold Mantaro hostage, threatening to murder him. Together, Mantaro and Kevin use the OLAP Buster as a new finishing move. [26]

Voltman is knocked unconscious, with only the ropes holding him in the ring. [27] Asuraman cuts these ropes, before he removes the General Stone from Voltman's body, and this leads to his death. [28] 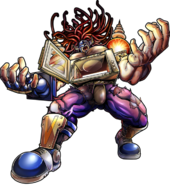 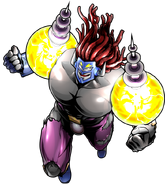 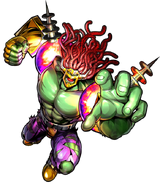 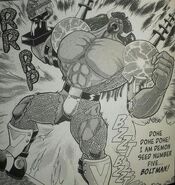