Warsman Begins - Confessions of the Mask!

Warsman has lost himself, forcing him to be chained by Robin Mask, who explains to him that no one will abuse him or harm him. He embraces Warsman, before donning his disguise as Mr Barracuda, and he swears - internally - that he will make his deceased parents proud, which triggers a flashback to childhood events. [1]

Warsman - then Nikolai Volkov - wore a bag over his head, as a child, in order to hide his robotic features. Due to this, he was treated poorly by other children. The children would throw rocks at him while he was taking bread and milk home. A large rock once struck him enough to draw blood, which frightened the children and caused them to flee. He cries and whispers 'help me'. It is revealed he has a dying mother, whom he helps by administering her medicine. There is no time to call for a doctor, as his mother - Natasha Volkoff - tells him the story of his father: Mikhailman. Despite being a champion, Mikhail told Natasha that he wanted to become stronger, and went for a Czech doctor named Yuri Kopylov (who was searching for a Chojin strong enough to endure a remodelling into a mechanical Chojin). [1]

Six months later, Mikhail returned with a modified body, but his heart was still the same. After some time, Nikolai is born, and they were a happy family. One day, however, Mikhail acted strange during a match, becoming aggressive to the point of killing his opponent and the referee. When he came back to his senses, he was unable to cope what his actions. He reveals a switch hidden on his abdomen and - after saying goodbye to Natasha and the baby Nikolai - self-destructed. With this, Nikolai learns why he is part machine. Natasha bids farewell, after begging him to remember the warmth of his father's blood courses through him, and finally dies. [1]

He swears never to be ashamed, as he carries his parents' blood.

Ten years later, as he visits the grave of his parents, the SKGB confront Nikolai. They promise that he will be even greater than his father, and - wishing to make his father proud - he joins their cause. He is taken to a hidden location named "The Wolf's Room", and given his black armour and the stage-name Warsman. Unknown to them, a man - (Barracuda) - appears to be interested in Warsman's abilities and watches them from afar.The training was intense and unethical, but Warsman displayed great physical prowess and combat intellect. One of the Chojin, Kommandas, is impressed with Warsman being able to withstand their hellish training, as at least ten people drop out every day. Warsman says he will never drop out and considers it to be heaven, as they get all the exercise they need, eat all the food they want, and sleep under a warm blanket, and asks Kommandas to stay strong. [1]

After six months of training, Warsman is connected to several cables in a laboratory and asked to use his computer-brain to locate a secret technique from one of the western first-rate Chojin wrestlers, and by doing so he learns Robin Mask's Palo Special. Barracuda watches from the shadows and is impressed with Warsman's talent, deciding that he will be able to defeat Kinnikuman. [1]

At night, Warsman talks to his deceased parents (whose photograph he has saved). He leaves his room to collect water for his flower, and overhears a conversation between Kowalski and his men. The only reason the SKGB is training Chojin is to use them as robotic Chojin soldiers capable of destroying an entire army, the wrestling training being only a ruse, and with the success of the first soldier, Warsman, they plan to mass-produce robo-chojin. Warsman cries in response, before he tears through the thick iron door. He attacks the people inside, until armed soldiers arrive. The injured Kowalski tells them to not fire and leave him to their second robot Chojin soldier. [1]

Warsman tries to escape, by running into the forest (despite it being nighttime). Kommandas, now a cold-hearted robot-Chojin soldier, appears and attacks Warsman. Warsman doesn't want to harm his friend, but Barracuda appears within the trees. He states that no longer the Kommandas that was once Warsman's friend, but a killer machine, and that to become a great Chojin, Warsman must be cold-hearted, be precise like an angel, and bold like a devil. Warsman than uses his Bear Claw and the Palo Special to kill Kommandas. Warsman inititally turns to attack Barracuda, but Barracuda reveals he is Robin Mask. [1]

Robin Mask then takes Warsman to Japan, so he can become a great Chojin wrestler. [1] 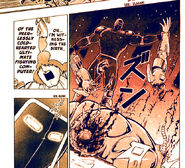